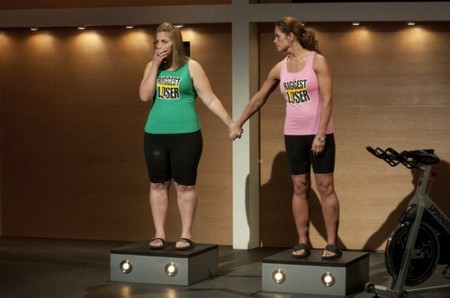 Tonight the finale of The Biggest Loser will air on NBC.  we’ll find out who will be crowned the Biggest Loser, as well as the PALA+ Challenge and At-Home winners.  On last week’s episode all the eliminated contestants had a chance to get back into the games for the finale.

They got to compete in a fateful, four-part challenge. The challenge winner will secure a coveted spot as a finalist, and the chance to compete for the $250,000 grand prize, along with the other two finalists revealed in last week’s episode, Conda and Kim. If you missed the episode you can read our full and detailed recap here.

On this week’s show it is a must-see, exciting live finale, the contestants from this season return for a special reunion and a chance to weigh in one last time – and show America how much weight they’ve all lost since beginning their weight-loss journeys. Those who have been eliminated will compete for the $100,000 “at home” prize. Then it’s the moment viewers have been waiting for, when one of the three finalists will be named this season’s “Biggest Loser” and win the coveted grand prize of $250,000!

The Biggest Loser airs at 8PM on NBC and we will be live blogging it with all the up-to-the-minute details. So make sure to come back to this spot and spend the evening with us!  Make sure to refresh often to get the most current details!  While you wait for the recap get check out a preview for tonight’s show and get ready by checking in with the trainers and final three players in the below videos HERE!

Tonight’s show: Allison welcomes us to the biggest night of the year for the Biggest Loser. The 14 eliminate contestants who stuck it out will weigh-in tonight. But the contestants who left the show will not.

tonight we’re going to celebrate how far the contestants came. All 14 players are coming out to face the scale again for $100,000. They are going to come out in the order they were eliminated:

Ben and Mike are first

Roy and Daphne forth

Allison tells the former contestants they look amazing!Allison tells him one of them is about to walk away with $100,000. After had back stage and have to remove their party close and put their weigh-in clothes on.

After seven months of intense competition-we’re down to the final three competitors.

Conda comes out and she looks really good. I don’t think it’s enough to winner the game.  Condra’s brother Jeremy is next.  Jeremy has lost a lot of weight. But he still has those cute dimples. The last person to bring out is former wrestler Kim.  Kim looks amazing and if I had to guess before they weigh-in I would say that Kim is going to win.

the winner of the biggest loser Michelle Obama challenge is Kim. She was of a gym built in her community for the community.

JEREMY IS THE BIGGEST LOSER – HE WINS!!!