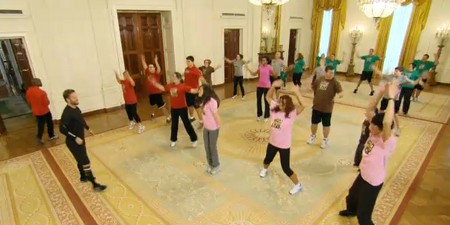 A new episode of The Biggest Loser airs tonight on NBC.  We are now at the 15th episode of the 13th season and The Biggest Loser goes to the White House tonight and joins Michelle Obama for a workout!   Stand by as we live blog the show for you with all the up-to-the-minute details.

On last week’s episode it was the eagerly-anticipated makeover episode.  The six remaining players competed in a challenge by shattering glass pane images of their former selves from week one on the ranch, then the makeover fun began. Fashion expert Jeannie Mai helped each contestant find stylish new clothes to flatter their slimmer selves.  They also got a special video message from First Lady Michelle Obama inviting the players to come to the White House!  If you missed the episode you can read our full recap here!

On tonight’s show The Biggest Loser is back at the White House to join Michelle Obama for a workout! The First Lady is a big fan and shares some healthy living tips. First Lady Michelle Obama’s Let’s Move! initiative focuses on solving the problem of childhood obesity.

SEE: Contestants On The Biggest Loser Threaten To Quit

The Biggest Loser airs at 8PM on NBC and we will be live blogging it with all the up-to-the-minute details, weigh-ins and elimination. So make sure to come back to this spot and spend the evening with us!  Make sure to refresh often to get the most current details!  While you wait for the recap, check out a sneak peek video of tonight’s episode HERE!

Tonight’s episode: Tonight Show starts with a  short recap of last week’s show when the contestants were shown a video from the first lady Michelle Obama telling them that they would be going to the White House to show off their makeovers.

Jeremy is surprise at how relaxed Michelle is and how she gives hugs to everyone. Michelle talks to each of the contestants and congratulate them on their weight loss and meets their family members.

Michelle tells the contestants of the biggest loser I bet her initiative to combat childhood of obesity.

They are starting out with jumping jacks.  Conda is so happy to be working out with this first lady. Kim is also excited. Bob says that Michelle Obama is what no excuses is all about who is busier than the first lady?

Bob was impressed at how good the First Lady is at doing  push-ups. Michelle tells everyone that the important part of her initiative is that families can work out together. Dolvett takes over the training session. Dolvett feels that having the First Lady there is a very moving emotional feeling for all the contestants.

First Lady tells Bob that he is cruel and asks if the First Lady can get a towel. The workout is over and everyone gives thereselves a big hand Michelle tells everyone that it was amazing and awesome. Michelle feels like she is now one of the team.

She tells them there is just one last challenge for everyone The President has an awarded and it is called the active lifestyle award. The challenge is that for six consecutive weeks people must eat healthy and get active. What they want to do is have as many people to complete in the challenge under a Biggest Loser contest’s name. People can sign up online on NBC’s website. They want to see how many people they can get to achieve this by the end of the biggest losers season. Whoever gets the most people signed up under the their name they will win a Gym to be built in their community. So not only will the contestant wins but the contestants community will win.

Michelle thanks everyone so much and tells them it was amazing.

Chris does not know what to do she decides to do the only thing she knows how do to comfort herself and that is eat. So she starts to eat many things that she knows she should not eat. She is angry and she is disgusted and so she pigs out. The old Chris was someone very unhappy and she does not want to be that person anymore but she is afraid that the old Chris has the ability to creep in. She knows that is something she has to fight.

Dolvett takes his team to work out he realizes that with the makeover and coming to Washington the contestants have not had a lot of time to work out. Bob gets his team in the gym. He asked them how they are doing. Bob asked Chris if she is there. Bob asks Chris if she has thrown in the towel and Chris lets Bob know that she does not feel she has a choice. He askes her why she does not have a choice she tells him because it’s the rest of her life and Roy wants her to come home.

Bob feels that if she throws this opportunity away now it is a waste of time. Bob wants to know –  isn’t their relationship about give-and-take when is Roy supposed to support her. Chris is very upset she is crying. Bob tells Chris something has to change. Bob tells her she has two choices she stays here and she respects this or she goes home.

Bob tells Chris Roy needs to take care of his end. She needs to tell Roy that she has experienced happiness here and she does not want to go home now. Chris realizes that for her to be the best wife to Roy she has to work her butt off here. Bob tells Chris she is fighting for her life right here right now.

The workout continues and Chris’ refocused. Dolvett is hoping that his last four contestants are the final four. The contestants are back at the ranch and they are ready for the weight-in.

Going into the way in Bob is completely nervous.

Below the yellow line is Kim and Chris.

Chris has been illuminated and she is not the biggest loser. She tells the contestants she’s going home with new treasured friendships that she will have for the rest of her life. She tells him she is going home to her family they need her and she needs them.

Chris was proud of herself she is thankful for every moment she has their and she is very grateful.