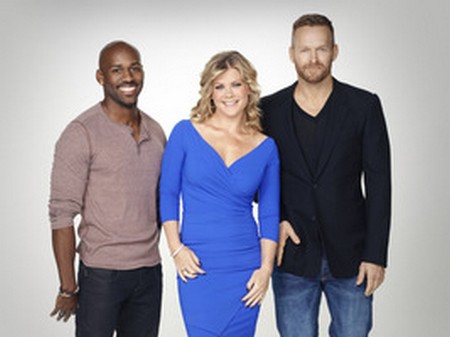 When the contestants returned to the ranch everyone was nervous what the scales would show.  Chris was very nervous because she felt a lot of stress and began binge eating.  She ended up gaining 2 lbs and Chris was sent home.  If you missed the episode you can read our full and detailed recap here.

On this week’s show, a surprising turn of events shakes up the competition, and the contestants compete in a rough and wild short version of a “Tough Mudder” competition. But they won’t be doing it alone – with them will be the show’s three most recent winners John Rhode, Olivia Ward and Patrick House.  The contestants review their progress; one player wins a new car.

The Biggest Loser airs at 8PM on NBC and we will be live blogging it with all the up-to-the-minute details, weigh-ins and elimination. So make sure to come back to this spot and spend the evening with us!  Make sure to refresh often to get the most current details!  While you wait for the recap, check out a sneak peek video of tonight’s episode below!

Tonight’s Recap: More than more than four months ago 20 contestants embarked on a journey. The obstacle of the season was overcoming some of America’s biggest excuses. Now in week 16 one more obstacle exists, but will it be too big for them to handle?

Jeremy, Mark, Conda Conda, Kim and Buddy tell the producers they are quitting – the game is unfair.  Bob goes to speak to Dolvett and tells him the contestants want to quit, Dolvett is surprise. Bob asks him to come with him so they can go speak to the contestants.

Bob doesn’t understand, every single season there’s an opportunity for an eliminated contestant to come back. To fight for a spot in the finals. Bob wants to see the contestants and see what is going on.

Bob asks Kim what is happening but Kim refuses to say anything. Bob doesn’t understand he expected to walk into anger and instead the contestants are resigned.  Buddy tells Bob that they are totally respectful of the decision, but it is just not a decision that they agree with. Bob is at a loss for words. Buddy tells Bob that at some point they have to do what they feel is right.

Dolvett doesn’t think this should be as big of a deal as everyone is making it, because it is not new.  Dolvett tells the contestants he would like another week to train with them. Dovett tells them he is not finished with them he still has goals. Mark tells Dolvett that he is looking at five people who worked their butts off to get to the final five.  Now the Biggest Loser is thinking of bringing back former contestants and one of the five remaining could be eliminated.

Mark tells the trainers at some point you have to make a stand. Bob says there’s always a twist and he feels the contestants just don’t like the twist.

Allison comes to see the contestants she understands what is going on and she brought a lawyer.  Allison asks them to explain to the lawyer their positions.  Jeremy tells the lawyer that it is a matter of right or wrong. The lawyer let’s Jeremy know that when they started this game they were made aware of the fact that one of the eliminated players would be allowed to work for a chance to get back in the game. It was a clause in a contract that each contestants signed so that they were aware that this might happen.

Kim tells the lawyer that she is not afraid of competing against anyone but she just wanted to compete against the other four contestants which are left.

Mark is leaving-he says,  for anyone who thinks he’s leaving and giving up he hasn’t.  He is only 11 pounds away from his goal weight. It is his decision, he had to leave. Buddy leaves, he says he is following his heart and he is doing what he thinks is right-he just does not like one of the game’s rules. But he does not feel like a quitter.

Conda, Kim, Jeremy come to see Allison and she tells them she is glad they stayed. Allison tells then 16 weeks is a long time and it has been intense and she knows how exhausted everyone is. But they are so close to the end. She tells them the key to making it to the end is motivation and that is what this week’s excuse is I lack motivation.

The players that stay above the red line this week guarantee themselves a place in the finals.  The player who falls below the red line will be eliminated immediately.

The remaining contestants go to the gym to work out. Bob and Dolvett are glad to see them.   Bob takes Conda for a ride in the in the SUV. Bob stops the car and tells Conda that her work out is about to start. He has a harness-he is going to put that on Conda and make her pulled the SUV with him in it.  Bob gets behind the wheel of the car and Conda tries to pull it.

Dolvett is putting Jeremy through the ringer. Meanwhile Conda is pulling the SUV around campus with Bob at the wheel. Bob was really impressed with what Conda could do.

The trainers keep reminding Conda, Kim, Jeremy that the person who falls below the red line this week will be automatically eliminated. They are really pushing the contestants.

The contestants also recorded a message to themselves when they first started the competition. They get to see the videos they made to themselves.

Conda her current weight is 205 pounds-her new weight is 195-she lost 10 pounds-a total percentage of weight loss of 4.88

Kim her current weight is 162 pounds-her new weight is 147-she lost 15 pounds-a total percentage of weight loss of 9.26

Jeremy his current weight is 249 pounds – his new weight is 239 pounds-he lost 10 pounds-a total percentage of weight loss of 4.02

Jeremy is below the red line and he is not the biggest loser and he is sent home.

Conda starts to sob she tells everybody that Jeremy is the person who deserves to be in the finals.

Kim has one tonight’s weigh-in and she has the highest percentage of weight loss so she has won a brand-new 2013 Ford escape.

Jeremy is below the red line and eliminated . Allison tells him it’s not over yet and she makes Conda and Kim come over to stand near her. She tells them that this is the season no excuses but there have been plenty of surprises and they have another surprise. The door opens and all the eliminated players walk-in.  The eliminated players have one last chance to fight for a spot in the finale.

Make sure to come back next week for our recap to find out which contestant will be coming back to compete in the finale.