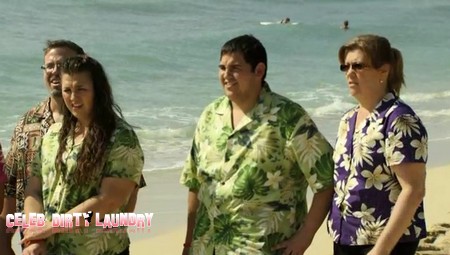 A new episode of The Biggest Loser airs tonight on NBC.  We are now at 12th episode of the 13th season.  On last week’s show the contestants were no longer in teams they found out it is now an individual competition – so now the contestants have the yellow line. Below the yellow line last week was Emily and Kimmie, consequently they were both up for elimination.  Emily got five votes so she was eliminated.  If you missed the episode you can read our full recap here!

On this week’s show the contestants head to the island paradise of Hawaii.  When Condra gets on the beach of Hawaii she is sure that Bob and Dolvett are going to make them swim 55 miles.  She is absolutely sure they are getting in the water.  Kim has a phobia of the ocean and what lies beneath.  She loves the beach but she prefer to lay on the beach.

While you wait for the recap, check out a sneak peek video of tonight’s episode below.

Dolvett comes and sees everyone relaxing in the pool – he lets everyone know there is no time to relax and no excuse not to do an activity.  Dolvett feels Kim is getting distracted and comfortable and doing nothing.

The contestants are on the beach to meet Dolvett and Bob.  Bob tells them he has a special treat for them – they are going to meet someone who is the epitome of no excuse – Bethany Hamilton.  Bethany tells the contestants her story and how at 13 years old a shark bit her arm off.  She inspires the contestants.  Bethany is going to teach the contestants how to surf.  They have a lot of fun and have a lot of wipe-outs.  Surprisingly Chris does really well.  By the end of the day all the contestants manage to get up on the board.  Kimmy does not swim so as she looks at the waves she is concerned.  Dolvett is also not a good swimmer.

Kimmy and Dolvett decide to hit the waves and enjoy themselves – they conquer their fear.

Kim is feeling alone since Emily has left but she does not feel needy.  Meanwhile, Kim is working out while Condra, Kimmie and Megan eat.

All the contestants head to a luau and they get a coconut drink and a lei.  Alison welcomes everyone to Hawaii – she is going to put everyone to the test in a Hawaiian style pop quiz.  She is going to ask everyone a question if you get it right you get a point.  The contestant with the most points gets a 1 lb advantage at this week’s weigh-in.

Chris wins the challenge and gets a 1 lbs advantage at this week’s weight-in.  Kim is disappointed she wanted to win.  Dolvett has a surprise for his team.  He makes them all lie down in the beach and the first person who drops his feet has to go and make a smoothie for the rest of the team.  Jeremy loses and he has to get on a bicycle which has a blender attached and bicycle and make smoothies for everyone.

Dolvett takes Kim aside – Dolvett thinks Kim is not acting like Kim.  He wants to know what is going on.  She tells Dolvett she is feeling alone because Emily is gone and she is feeling weird.  Dolvett tells Kim he feels like she is not competing.   He reminds her that she is a competitor.  She knows if she falls below the yellow line -she is going home.

Bob’s team meets with him and he wants to show them they can lose weigh on vacation – he tells them they are going to be rowing.  Dolvett is coming up with a unique workout for his team.  Bob tells his team to get out of the canoe and start swimming.

The teams come to meet Alison for another challenge.  Alison tells them one of them is about to win immunity at this week’s weigh-in.  There is a hill and as you go down the hill there are leis hanging.  The contestants run down the hill and take leis and then run back up and put it on each others Tiki.  Once a contestants Tiki has 10 leis they are eliminated.  There is also a special Lei and if someone puts the special lei on another team members Tiki they will be automatically eliminated from the challenge.

The team members are gunning for Kim.  Kimmie finds the special lei and that means she will be able to eliminate someone automatically.  She chooses to eliminate Kim.  Mark was surprised when Kimmie did that – he does not see the logic at all.  Kim is not shocked she knows she is a threat.  Chris is the second person eliminated.  Kimmie is third, Mark is forth, Jeremy is fifth.  Conda won immunity.  Jeremy again gave his sister immunity.  Conda is told if she gains weight this week – she loses immunity.

Mark feels bad for Kim, he asks her why she feels like everyone is against her and Kim tells him she definitely is a target.  She is sure if she falls below the yellow line she will be sent home.  Kim tells Kim he is not pleased what the girls in the house are doing and he is not happy with the drama crap.  Mark tells Kim he is not going vote for her.  Mark would rather fight Kim to the end than to send her home because she is a threat.  Mark is noticing that a lot of the contestants are being lazy.  Kim thanks Mark for supporting her.  Kim is sure some of the contestants are going to be in trouble this week because she does not see them working out much.

The contestants are at Pearl Harbour for the weigh-in.  Two people will fall below the yellow line tonight.  Condra has immunity tonight as long as she does not put on weight.

The elimination is on the USS Missouri.  Kimmie asks the team members to vote her out and let Megan stay.  Kim reminds everyone if they are being strategic Megan should be the one to go.  She also reminds everyone that was the reason they gave for voting out Emily last week.

With three votes Kimmy has been eliminated.  Chris is upset because her best friend is being eliminated and she breaks down in tears.  Megan tells her Mom Kimmie that she has a lot of faith in her and she is sure she will do well at home.

The End, see you next week!