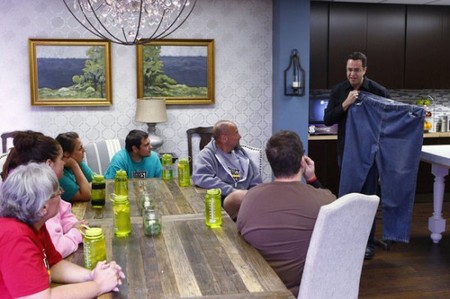 A new episode of The Biggest Loser airs tonight on NBC.  We are now at the 13th episode of the 13th season.  Stand by as we live blog the show for you with all the up-to-the-minute details.  On last week’s show the contestants went to Hawaii and the excuse of the week was ‘I cannot lose weight when I am on vacation.’  The contestants got to meet surfer Bethany Hamilton.

Bethany tells the contestants her story and how at 13 years old a shark bit her arm off.  She inspires the contestants.  Megan and Kim were the two women under the yellow line and up for elimination.  With three votes Kimmie was eliminated. If you missed the episode you can read our full recap here!

On tonight’s show To address the excuse “exercise is boring,” trainer Dolvett Quince spices things up by taking contestants to a Zumba class, and trainer Bob Harper takes the players mountain biking. In this week’s pop challenge, the seven remaining contestants try to load boxes of food on to seven trucks, with the contestant who finishes first getting the chance to pay it forward by donating the products to their hometown food bank.

Then a cooking challenge, that begins at the market and ends at the ranch, finds the contestants racing against time to whip up a healthy, tasty and creative dish. Their judges will be season 12 fan favorites Antone, Becky and Vinny, who stick around to get better acquainted with the contestants before another weigh-in and elimination sends a player home. Alison Sweeney hosts the series.

The Biggest Loser airs at 8PM on NBC and we will be live blogging it with all the up-to-the-minute details, weigh-ins and elimination. So make sure to come back to this spot and spend the evening with us!  Make sure to refresh often to get the most current details!  While you wait for the recap, check out a sneak peek video of tonight’s episode HERE!

The job today is for the contestants to each load 150 boxes of food – they have to take one box at a time and the first person who loads their truck will win the challenge.  Not only will the contestant win but Newman’s Own will donate 30,749 ponds of food to the winner’s home town’s  ‘Feed America food bank.’  The contestant who wins will win a 1 pound advantage on the scale this week.

Mark wins the challenge and so does his home town.  The contestants get told that if all the contestants finish loading their boxes Newman’s own will load once truck load of food to the other contestants towns.  Mark pitches in to help everyone.

Bob talks to Megan and tellls her she has the lowest amount of fat loss in the house and he knows she can do better.  Bob lets her know he cannot do it for her – he needs her to want it and to fight for herself.  Bob tells all his team they are getting off the ranch because he has a fun activity for them.

The excuse this week is exercise is boring and Dolvett is taking his team to Zumba exercising.  The contestants realize they are in a class of Zumba and they are nervous.  Zumba is expressing yourself through dance.  By the time they get in to it they are all having a great time.

Bob is taking his team bicycling and the team is loving it.  They are finding it more difficult than the spin bike they use in the gym.  Conda spends the whole ride complaining.

Jarad Fogle ‘The Subway Guy’ who use to weight 425 lbs and he comes to talk to the contestants about how he lost 245 lbs in a year by eating Subway in school.

The contestants come to meet Alison and she tells them there is another excuse they have eating is boring – there is another challenge.  The contestants have to come up with a recipe and find all the ingredients in seven minutes.  Then they have 20 minutes to make the dish.  They will be judges on: taste;  creativity and nutritional value.  There will be 3 surprise judges who will decide the winner.  The winning contestant will get $ 1,00o for every pound they lose this week.

The surprised judges are season 12 former contestants Vinnie, Antone and Becky – the contestants have to face the judges one at a time.  The judges thought Jeremy’s meal was funny basically toast, banana and jam.  Megan’s dish is full of sodium but it taste goods.  Conda’s dish they loved.  Chris’ chicken was still raw.  Mark’s dish they liked but by adding the feta cheese he added sodium and fat.  Buddy’s tropical salad – they liked it but he used real mayonnaise and they were not happy.  Kim presented her Teriyaki stuffed Portobello mushroom and they loved it.  Kim won the challenge – it was low in calories, it was tasty and it was creative!  Good for her because Condra was so sure she won – I am betting she is going to be totally pissed!

After the challenge Chris heads to the gym because she it totally pissed because Antoine criticized her food and the fact that she made excuses.   Antoine suggested that perhaps Chris is making excuses about her exercising.   Antoine comes into the gym to find out what is wrong with Chris and to try and explain why he said what he said.  He hopes it helped her – but rather than help Chris feels like she is back at square one.

Bob is ready for the last chance workout and he is excited.  He asks to see Megan’s video diary for the week and he can see that Megan has really worked this week.

Dolvett’s team has their last chance workout – he has set up an obstacle course – Mark is really really pushing he is trying to beat everyone.  Kim really wants to beat Mark and the time to beat is 3:07.  Kim beats Mark at 2:37 seconds.

Bob is fixated on Megan he is determined to have her above the yellow line this week.  Bob is in her face screaming at her.  Megan is really impressing him this week – she has stepped up and proved she is a competitor.

Below the yellow line is Mark and Megan this week.

Megan is eliminated and she is not the Biggest Loser.  She tells everyone she feels she will be successful when she goes home – she is not leaving with a heavy heart!