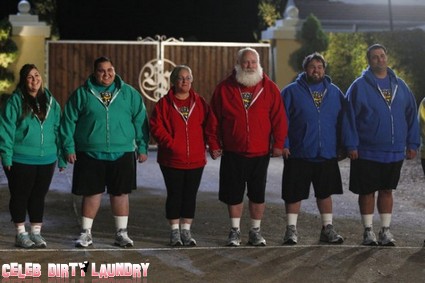 The Biggest Loser is back tonight with a whole new episode and we will be covering the show with all the details of the challenges, drama and elimination.  On last week’s show Bob was pissed at Dolvett because he said Dolvett stole his training ideas from previous shows.  Bob’s team eventually won the weight in after the red team made a ridiculous gamble and lost the weigh-in.

After the red team did not lose the 94 lbs they committed – Mike Messina was sent home and it was more about issues he had with Condra, the two did not like each other. However, Mike asking Dolvett for a snack during the last chance workout probably did not help his cause.  Still I felt Kim or Kimmie should have went home they were responsible for the red team losing the challenge.   We recapped the show and if you missed the episode you can read it here.

On this week’s episode it kicks off with a Chinese buffet temptation that will give the winner complete control of how contestants will be matched up for a face-off challenge in the gym – and also give them a two-pound advantage to use or give away. Later, trainers Bob Harper and Dolvett Quince coach the contestants through a wild water-transfer challenge that will reward the winning team with the most coveted prize of all – video chats home. And one player makes a shocking decision that stuns everyone before another contestant is sent packing following the weigh-in.

We will covering the show with up-to-the-minute details at 8PM EST so make sure to check back then and refresh often for the latest details!  While you wait for our recap, you can see a sneak peek video here!

Tonight’s show: Joe is upset and he is missing his family – he knows he has to be on the Ranch but he is homesick.  Jeremy tries to console him.  The contestants come into a room that is full with a Chinese food and Alison is there.  Alison tells them to feast their eyes on their first temptations.  Alison tells them there are 41,000 Chinese restaurants in the USA.

This week is face-off week, each member of the red team will face off against one member of the black team.  The person who wins the weight loss gets a point and then the team with he most points wins.

The person who wins today’s temptation decides who faces who in the faceoff and they get a 2 lbs advantage.  But the winner can also give the 2 lbs advantage away.  If there is not winner to the temptation then the contestants will have to face their love ones.  The person who wins the challenge will be the person who eats the most calories.  The Red Team decides not to eat.  The Black team decides that one person will eat a fortune cookie, the problem is they cannot decided who will eat it and  time is running out.  Finally Cassandra eats the fortune cookie.  Then the team decides that Cassandra has to eat 2 cookies just in case the red team did the same thing.

Cassandra has complete control of the game by eating 2 fortune cookies.  Cassandra has a 2 lbs advantage and she will have to let Allison know before the weight in.

The face-off’s Cassandra pics are:

Bob comes in to see the Black team and asks what happened – the team tells Bob that Joe went home.  Bob is shocked, there has never been a contestant that let the show.  Bob does not buy his excuse.  Bob is not happy!  Bob calls Joe to find out what happened and Joe tells Bob his kids happened.  Bob tells him the team is fractured because of him and he is not buying Joe’s excuse at all.

The red team are in the gym and Dolvett is pushing the red team because they lost the weigh-in last week.  Dolvett tells them they have nothing but work in front of them.

Bob pushes the black team he does not want to lose this week.  The face-off is good for the contestants they don’t want to lose to each other.  It is another week with Bob on Gail’s back.  I have to say I don’t know if it is the editing but they are making Bob seem like a mean son of a bi*!h with Gail.

The black team and the red team meet with Alison and she tells the Black Team they have forfeited a point because Joe decided to leave.  Today’s challenge Alison tells the contestants they are going to need all the help they can get.  Bob and Dolvett are going to coach and support the teams during the challenge.

The challenge is a water relay  – the contestants will pump water in several different ways – and pass water around on a relay.  The last person to get the water pours it on an ice-cube.   The first team to melt the ice cube will win the prize in the ice-cube.  The challenge is difficult it takes about 15 pumps to get enough water in the bucket to start the relay.

The red team gets the prize out of the recap first but they have to get the whole team over the finish line before they actually win.   The challenge was close but the Red Team won the challenge.  They open the price and they get a video chat with their family.  The red team thinks seeing their family will give them a boost.  Some of the red team members give their challenge win to their family members.

Bob goes to visit the Aqua team to help them lose the weight so they can get back into the game.  They both want to get back on the Ranch and are willing to work hard.  The brother and siter work their butts off and Bob feels a lot of potential in both of them.  He hopes they get back on the Ranch.

Cassandra won the challenge and has a 2 lb advantage and she decides to gives 1 lb to Megan and 1 lb to Gail.  The Black team wins the challenge.  Roy is the person with the highest percentage of weigh loss so he will have immunity.

Lauren is sent home she is not the Biggest Loser.  The contestants think she is the strongest among them and she will do fine at home.