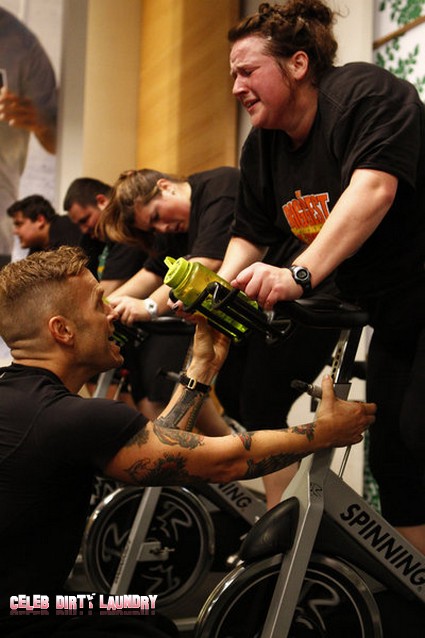 It is week two on the Biggest Loser season 13 and three contestants have already gone home.  Twenty contestants started out this season, but only 18 made it into the ranch.  Before the contestants even got on the ranch two contestants were eliminated – the brother and sister team Adrian and Daphne. They were told if they lose 50lbs in one month at home with no trainers they have a chance of getting back in the game.   Ben was eliminated after the weigh-in. So three people went last week.  I think they made a mistake getting rid of Ben, he put up big numbers, we will see what happens.   If you missed the show you can read our official recap here.

This week will be exciting because the stakes are high this when representatives of each team bid on the percentage of weight they think their team will lose at the weigh-in.  The highest bidder gets a five-pound advantage if they hit their number at weigh-in – or lose the advantage to the other team if they don’t hit their mark.

We will be live blogging the show from 8PM – 10PM EST so make sure to come back to this spot for all the up-to-the-minute results.  So stay tuned and keep refreshing for the latest updates.

While you wait for the recap you can view a sneak peek and synopsis for tonight’s show here!

Tonight’s Recap:  Alison comes to see the contestants and tells them she has interesting news for them.  For the player with the highest percentage of weight  loss they will be able to give immunity to one person on the losing team.   It is a big incentive!

Alison is going to give them time to think about it.  She asks for two people from each team to go with her.  Kim and Kimmy represent the red team and  Emily and Joe represent the black team.

Alison tells them they are about to up the ante in the game.  Alison tells them they have a chance too win a 5 lb advantage.  They have to bid what they think their team’s total weight loss will be. If they guess right they get a 5 lbs advantage and if they get wrong the other team gets the 5 lb advantage.  Red Team gets to bid first and they bid 3.8%  – they think the red team can lose about 94 lbs as a team.  Black team folds.

Alison tells the red team in seasons past the total percentage of weight loss has been 2 % so red team has a big job ahead of them.

The red team has to tell Dolvett about the poker challenge.  Dolvett asks them if they know how difficult that is after the second week?  He tells them they are terrible gamblers.  Dolvett tells them they have to work twice as hard.

Bob is pushing his team, he has not intention of losing the second weight in.  Cassandra is in the corner crying, everyone is complaining on the black team.

Because Kim and Kimmie put the red team in the position they are in Dolvett is pushing them even harder.  The red team is working hard to show the black team they are not intimidated by the 94 lbs.  Dolvett wants to be a winner!

Chism who is 19 years old is having a problem.  He is having an asthma attack and Bob gets him through it.  Chism is ready to give Bob whatever it takes to get his life back in order.

The players get a sobering wake-up call when Dr. Huizenga meets with them and  reveals their real “inner ages.”

The contestants are in the kitchen and Rachel Beller Nutritionist for the Biggest Loser comes in, she is the person who stocks the refrigerator and makes sure the contestants know how to eat healthy.  She is taking the  contestants shopping for food.  The first things that the contestants see when they get to the grocery store is cookies, cakes and pies.  Rachel teaches them what to buy and the calories and how to shop wisely.

The contestants head to the first challenge as red vs black.  Today they are competing for something that will give them a nutritional advantage.  The winning team members gets the Biggest Loser meal plan for six  months delivered to their door.  They will work together to turn an anchor wheel to bring in puzzle pieces.  With the puzzle pieces they solve a puzzle.  The first team to hoist the puzzle wins the challenge.  There are 24 puzzle pieces.

The black team wins the challenge but it was very very close.  It was a race to the challenge and the closest Alison has ever seen.   She tells the contestants it proves that this game is all about teamwork.

Rachel heads to the Aqua team in Chicago, they were eliminated before they even got on the ranch.  Rachel is going to show sister and brother Adriane and Daphne how to eat right.  If they lose 50 lbs they may get back into the game so Rachel is helping them learn how to eat healthy.  She shows them some quick easy recipes that are low in calories and big on flavor.

Last chance workout:  Dolvett is pushing the red team and making them work hard he knows they have 94 lbs to lose so he is pushing them as much as he can.

Bob is in a bad mood he feels that Dolvett has watched the past years of The Biggest Loser and he is copying all his workouts. When Bob is in a bad mood the black team suffers. Bob thinks the atmosphere in the gym is so toxic that he takes the black team outside. When he gets outside he sees all the team standing except Gail and Bob is not pleased.

The red team is really working out but everyone notices that Mike is not working as hard as everyone else.  Mike wants breaks, water and even snack breaks.  Everyone notices he is the only red team member not sweating.

The team with the lowest percentage will have one member eliminated.

[Missed rest of individual weights they did no show]

Black Team has a 5 lbs advantagee

So neither Mark or Roy can be voted for.  The red team members make a case why they should stay. Mike asks if the team feels anyone has not given their all.  Connie smiles and says she feels Mike is the person who has not worked out as much as everyone else.  Mike feels Kim should go home because she made the best that made them lose.

The contestants give him advice and tells him he has quit nicotine.  He gives his word not only will he lose weight but he will give up nicotine and he shakes everyone’s hand as a promise that he will do it.

That is it for this week, we will be posting our wrap-up tomorrow morning of our thoughts of the show.  Make sure to stop by.  What did you think of the episode?  Sound out in the comments below!