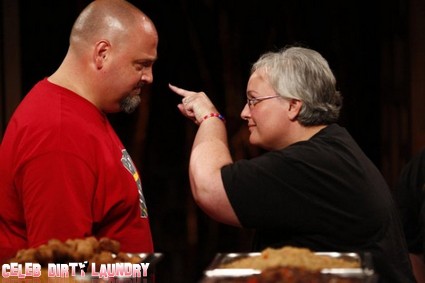 Last night the third episode of the 13th season of The Biggest Loser aired and we recapped the episode.   Because Bob Harper’s black team won last week Dolvett was out to win on last night’s episode and we have a wrap-up and some observations of the show and some questions.

The show kicked off with a Chinese buffet challenge/temptation and was it just me or was the red team crazy not to eat something?  It was a challenge after all and they could have eaten a fortune cookie or two that were just 30 calories each.  The black team ate two fortune cookies and won the challenge and got to pick the face-off teams and a 2 lbs advantage.  Do you think the red team made the wrong decision?

At the beginning of the show Joe decided to go home.   He claimed it was because he missed his family too much and because his brother was sent home he did not want to be on the Ranch.   Joe finally went home and all the contestants were shocker.  Bob did not buy his reasons.  What do you think of Joe leaving so early in the game?

Is it just me or has Bob gotten meaner this season.   I thought he was really hard on Gail and this is not the first week – last week he was hard on her too.  Perhaps it is the editing but they are making Bob look nasty.  If Bob spoke to me the way he spoke to Gail I would have hit him.  What do you think of Bob this season?

I like that the contestants had to face-off against each other this week.  It made the show more interesting.  What did you think of the face-off?

Lauren was sent home because her team members claimed that because she was an athlete she would be able to do okay on her own.   I think it was a mistake to send Lauren home, she was someone who could help the team in future challenges.  I think they should have sent Nancy home.  What do you think?  Did they sent the right person home?