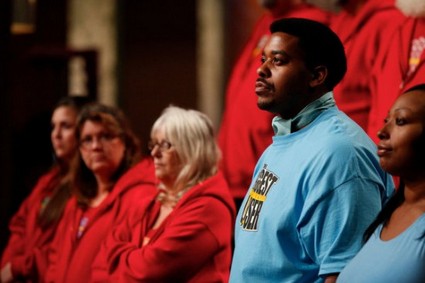 The Biggest Loser is back tonight with its 5th episode of the 13th season and we will be covering the show LIVE with all the details of the challenges, drama and elimination. On last week’s episode Gail was sent home and if you missed the episode you can read our official synopsis here!

On tonight’s episode there will be a lively challenge that involves bouncing medicine balls on a trampoline to get them over a wall tests the speed and coordination of both the black and red teams as they vie for a valuable prize – the ability to choose which player’s weight won’t count at this week’s weigh-in.

Then it’s a blast from the past when aqua team siblings Adrian and Daphne, who were eliminated before they even got to the ranch in episode one, come back to weigh-in and reveal whether they’ve lost enough weight to return to the competition. And a few personality clashes add tension in the house before the players decide which contestant will go home this week.

We will be live blogging the show with all the up-to-the-minute details and all the highlights and drama at 8PM EST. So come back to this spot and see what we are talking about! While you wait for the recap you can check out a sneak peek video HERE of tonight’s show.

TONIGHT’S RECAP:  After the vote the contestants are told they have to go to the gym that the night is not over. There is going to be an announcement in the gym, they are wondering what is going to happen.

She tells the Blue Team and The Red Team that sometimes when you don’t meet your goal you get a second chance. She tells the Aqua team to come in.

Adrian and Daphne the brother and sister team were sent home the first week without getting into the ranch. It has been 30 days since they left – and they had a goal, if the two of them could lose 50 lbs in the first month of competition they would be back on the ranch.

Tonight they will be weighed to see if they have lost the 50 lbs.  Daphne steps on the scale first her starting weight was 271 lbs and her current weight is, 245 lbs. She lost 26 lbs.  Adrian steps on the scale next his starting weigh was 370 – his current weight is 336.  He has lost  34 lbs.  They find out they are back on the ranch but they will be separated. The both choose Bob as their trainer. Alison tells them one of them has to choose Dolvett. They decide to have a rock/paper/scissors competition and Daphne wins Bob. Adrian is now on the red team.

Adrian and Daphne are told they have immunity this week as long as they don’t put on weight. Their weight will still count towards their team’s total.

Adrian sits down with the red team and they tell him that the red team works hard and puts in 100%. Adrian tells the team while he was home for the month he worked out 14 hours a day and the red team is skeptical of what he is saying.

Bob comes into the black team and Daphne is there and she tells Bob she won him.  Bob asks who voted for Gail to be eliminated.   The people who did raised their hands and Bob said, ‘Good.’  Bob tells the people who voted for Chris this week were wrong.  He tells them that Chris is a strong player

Bob is in the gym and he is pushing the team.  Daphne is happy she is able to keep up with the rest of the black team.

The red team is hoping that Adrian can keep up with the rest of the red team.  Dolvett tells Adrian he has to earn his space on the red team.  Adrian is determined to give his all.  He wants to set records on the ranch.

After the black team works out with Bob they get their homework and Daphne finds it difficult and actually leaves.  Later that day Adrian comes in the room to talk to Daphne and tells her he felt they worked harder when they were at home.

Conda is bitching because she is telling Kim that Adrian told her they have to pick up their game.  Kim and Conda have had it with Adrian they think he should lay low.

The next day Chris asks Jeremy and Chism to talk.  She just wanted to let them know how much she appreciates them on the team.  Not what they expected because they were the two who voted for her to go home.  Jeremy find the conversation very awkward.  Chism also feels the situation was weird and awkward and he did not talk much.  Chris tells them if they need something he is there.  Chism thinks it is really late for her to be reaching out.  Jeremy thinks the reaching out failed, she needs to try harder.

The red team and black team arrive at the beach.  Today’s challenge the teams have to bounce medicine balls on a trampoline to get them over a wall.

The team who wins the challenge will pick one person from each team whose weight will not count.  Roy and Chism have to sit out on the challenge because they have not been medically cleared.  The red team still has one extra player so they sit out Nancy.

The red team are meeting and most of the red team feel Conda and Kim are being territorial so they decide to meet.  Nancy starts the meeting saying they are all adults so if there is a problem talk in the open, stop gossiping.  Conda asks if Nancy has been offended and Nancy tells Conda that she is fed up hearing her complain about Adrian.  Adrian asks Conda what is wrong with her, she does not even know him.  Conda claims Adian said that the rest of the team has to step it up.  Kim tells him that because he was bragging about working out 14 hours a day set a tone.

Adrian tells Kim that they worked their butt off when they were at home.  Nancy suggests than rather than he talk so much he should listen.  Adrian is offended.  The red team is afraid that the tension with Kim, Conda and Adrian are going to affect the red team.

Adrian meets Dolvett who asks him how he is adjusting.  Adrian claims that all is going well.   He tells Dolvett he is at the ranch to lose weight and be the biggest loser.  Dolvett tries to get Adrian to come clean and tell him what the tension is with the whole team.  Adrian won’t tell he does not believe in talking behind peoples back.

At the last change workout the black team is working really hard they know they are at a disadvantage because they lost the challenge.  Bob is pushing his team so hard – because he wants it not to matter who the red team picks on the black team not to count.  Bob is frightened that if Chris does not lose enough the black team will send her home.

Chism is having a really tough time with the workout, so much so he loses his breath.  Chism does not get discouraged.

Dolvett is really pushing the red team.  He keeps making them run faster on the treadmill.  He has them up to 10.0.  Dolvett tells the team to put it up to 11.0 for 10 seconds.  The team cannot believe he is pushing them so hard.

Adrien welcomes the teams and says she can feel the tension today.

The Red Team decides to sit out Megan for the Black Team and sit out Nancy for the Red Team.

The Black Team wins the weigh-in and they will all be here for another week.  On the red team Mark makes his case to stay.  Joe tells the team he wants to be on the ranch and he needs to be on the ranch.  Adrian wants to talk to the group.  He says that he apologizes to the team and if they saw anything that he could more the team should tell him.  Mark tells Adrian that he feels he was playing a game this week because he lost only 2 lbs and his sister lost only 1 lb.  Adrian is pissed off!

Nancy has been eliminated and she is not the Biggest Loser.  Adrian says he cannot believe they voted Nancy out and he feels that since they voted her out they are playing the game.  Kim tells Adrian there is a right time to do things and this was not the time to talk.  Nancy tells them that this needs to just end because Adrian is taking the moment away that they all need.