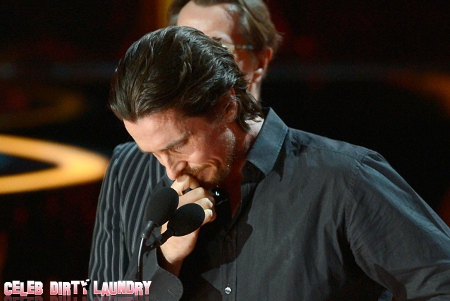 At last night’s MTV Movie Awards, Christian Bale got extremely emotional — and started crying — upon seeing his late friend Heath Ledger back on screen in his most memorable role as The Joker.

The Batman actor took to the stage along with Joseph Gordon-Levitt and Gary Oldman to present new footage of the newest Batman installment directed by Christopher Nolan, but before this was done, Bale introduced another video that traced the history of the superhero through Nolan’s series.  This footage included clips of Ledger, who died shortly before receiving his well-deserved Oscar for his role. The world was saddened and shocked to hear the news of Ledger’s passing from an accidental overdose in 2008.

The clips showed a montage of the first two films, Batman Begins and The Dark Knight, and upon its conclusion it was very touching to see Bale well-up.

“It’s great to remember Heath”, Bale told the audience.  I understand his reaction, as the impact of seeing Heath on the big screen again was quite powerful.  It was a very touching moment, one shared by the entire audience, who immediately broke out in quiet applause.

The latest installment of the film, which will also be the conclusion to Nolan’s franchise, hits theaters July 20th.  In the newest clip, fans were introduced to two new characters, Anne Hathaway’s Selena Kyle AKA Catwoman, and Tom Hardy’s villainous Bane.  The story takes place 8 years after it’s predecessor, and we find Batman not in the same emotional state he was in before.  Let me tell you – it looks pretty awesome!  Christian Bale as Batman is genius, and with all the original cast returning – Morgan Freeman, Liam Neeson, and Michael Caine – it’s bound to be a summer blockbuster.

Check out the trailer here and see for yourself!