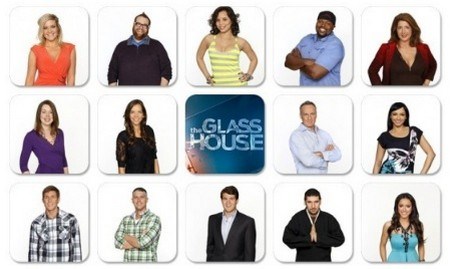 ABC’s new and controversial show, the Glass House premiered last week in what they hope will be the first season of many. If you missed the episode, you can read the full and detailed recap HERE.

The show was accused of being a rip-off of Big Brother and it had many hurdles before it got on the air.  So the questions we are left with is, was the Glass House really worth all the fuss not to mention the millions of dollars spent in legal fees? The premiere came in with a low 1.6 million viewers behind The Bachelorette.  As you can see, not really an impressive start.

There are two teams, Jacob and Jeffrey volunteered to be the team captains. Jeffrey’s team wins the first challenge, Jacob loses which mean he is going up for elimination. Meanwhile, everyone is hating on Alex and for good reason, this guy is a real jerk as he just keeps name calling and pissing every one off. The house votes to put up another house mate alongside Jacob for elimination, it is overwhelmingly Alex that is chosen.

On Tonight’s episode, the first elimination is upon the house and the contestants are challenged in a game called “Ruffle Your Tail Feathers,” which requires a lot of coordination.

We will be live blogging the season premiere of Glass House tonight with all the up-to-the-minute details at 10PM EST so make sure to come back to this spot and watch the show with us. Refresh often to get the most up-to-date results!

RECAP: Last week Jacob quit the game, does this mean that Alex is going to stay or will viewers send him packing?

Kevin didn’t start out with much respect for Alex, but he really finds that he scraped the barrel when he left the house.

Joy doesn’t want Alex to come back, neither does Erica and Gene just wants to protect the two women.

The player find out that one player quit the game and the viewers are going to decide if the other will return to the house.

Housemates gather in the living room, who is going to return from limbo?

The viewers don’t want Alex back, they send him home; the house is thrilled and the look on Alex’s face was truly gratifying.

Holly tells Erica that she voted for her last week and not Alex, she tries to apologize but Erica tells her the writing is on the wall and she basically thinks she is dumb.

The women gang up on Holly; they want to know if she really took art history.  Holly comes through and tells the truth, she majors in psychology and swears on her family but can’t even name one psychologist and their view point.

Mike and Kevin are in an alliance, they want Apollo in but he doesn’t want to.

It’s time to find out which contestants have the least amount of votes from viewers are;  Apollo and Ashley. The two will be team captains and if their teams lose they will go to limbo. It’s a double edged sword, you almost want the people that you can beat in limbo to be on your team.

Apollo and Ashley have to pick their teams. Apollo goes eight into strategy, he meets with his team and wants to know what they were talking about in the kitchen when he walked in.

Team Ashley is first, the challenge is called “Ruffle Your Tail Feathers”, the team has to coordinate to get eggs into bird houses as quickly as possible.

Team Apollo’s turn proves that Gene is a terrible athlete when he can’t even throw a ball.

The results of the challenge are in, team Apollo finished in 5:54 and team Ashley finished in 3:38. Apollo is heading to limbo and one of his team mates will be joining him after the house vote.

Apollo asks Gene if he threw the game. Gene denies that he did even though he dropped all the balls.

Ashley’s team has to do some burdens since her team won. Gene calls a house meeting about the rumour that he threw the last challenge. Apollo comes right out and says that he thinks Gene threw it, plain and simple.

The house mates find out what the viewers answered about their private questions.

Next week the whole house breaks down, you don’t want to miss it!