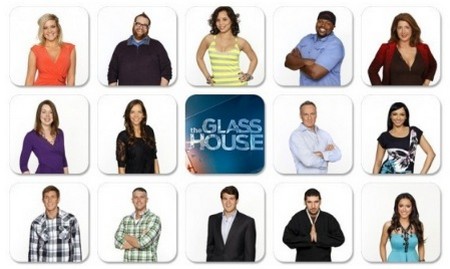 ABC’s new and controversial show, the Glass House premieres tonight in what they hope will be the first season of many. The new reality show has had lot of hurdles to climb to get to this evening; CBS asked a federal judge to ban the show from airing because they believe it is a “rip off” of CBS’s hit reality show, “Big Brother””.  CBS also claims that ABC hired former “Big Brother” producers to work on the Glass House.

The contestants will be sequestered in a glass house, all 14 players will be under strict 24-hour surveillance with absolutely no access to the outside world. The viewers will get to control the show from challenges, to who needs an attitude adjustment and most importantly, to who we want to send home and who we want to win the big prize of $250,000.00.

I can’t wait to see who dominates and who goes home first! My bets are on the Robin the Blogger making it far, for obvious reasons; us bloggers have to stick together!

We will be live blogging the season premiere of Glass House tonight with all the up-to-the-minute details at 10PM EST so make sure to come back to this spot and watch the show with us. Refresh often to get the most up-to-date results! While you wait for the recap you can check out a sneak peek video and some spoilers for tonight’s episode HERE.

RECAP: It’s time to meet the contestants, Andrea is a Mormon and playing the game for her family.  Ashley promises us she is not going to be fake or talk behind peoples backs, let’s see how long that lasts. Gene is 340 pounds of pure awesomeness, according to him anyway. Jacob thinks America wants his good looks and hot body. Holly is very real and a smart girl, claims she has a lot of brains. Jeffrey is bold and considers himself fat hot. Joy is a mom and a nurse, she has also posed for Playboy. Robyn says she was born to be a Jewish mother. Kevin is a police officer and has a fifteen year old girl. Stephanie claims to be yet another real person. Mike thinks this is his last hoorah in life.

The players are invited to the wall, that speaks! First is to break the contestants into teams; the viewers chose east versus west.  The pathetic thing about this, some of the contestants have no idea if they live in the east or west. The wall tells them that they have to choose their captains.

The viewers have chosen rooms for some of the contestants; everyone goes around the house to look at the rooms.  In the Enemies room, Hollie and Robin are assigned because viewers don’t think they will get along.

When the contestants hear the chimes, they know something is up. Right now, it’s a housewarming party; it’s a pool party. Holly plans on using her looks in the house to gain momentum. Everyone is changing into their swim attire. When Jeffrey gets into the hot tub, it overflows but nobody cares because they are enjoying umbrella drinks and sushi.

It’s time for the first challenge, team captains step forward and one player from the losing team will be sent to limbo with one team player; the viewers will decide who goes home.

Basically there are phrases that the opposing contestants said before they entered the house and the teams have to match the phrase with the contestant who said it.

Joy wants a spanking, but nobody is around to give it to her! All the other women claim to also be into butt spanking as well.

Alex took a dare from Joy and paraded around the house in women’s underwear. Kevin was really upset about it and told him that it was grossly inappropriate. Alex made some comment to Andrea about her being married and her probably not having seen this in a long time. It must have been gross because even Jeffrey, who is openly gay, looked disgusted. I can just see that our sexy cop has a temper and I can’t wait to see what happens when he loses it! Luckily for Alex, he put his clothes back on so he didn’t have to find out.

Joy takes Alex out of the room to try and cool off the situation. Andrea tells Alex that she doesn’t care what he does, but she doesn’t appreciate being in the middle.

Every week the contestants get to ask the viewers a question. Here are a few of the questions and answers; Erica want to know if Arie was still on The Bachelorette. Apoloo wants to know if they smiled at least once today, they say yes. Alex wants to know if he is going to be an epic villain, the viewers say yes.

Everyone is hating on Alex, he keeps name calling and pissing everyone off – I can tell you who is going to go home at this point.

Alex reveals to the camera that he is doing all this on purpose, he is trying to piss everyone off because how he says it, “it is easy to push their buttons.” Damn, reminds me of Dr. Will from Big Brother! Is somebody maybe a little too scripted here?

Joy heads out of the kitchen in tears from Alex’s insults, but Gene is right there for a nice consoling hug. Meanwhile, Jacob really feels like he is defeated and Joy tries to give him some good advice to stop being so negative.

All the contestants get to cast their vote for who is going to join Jacob in limbo. Kevin and Joy are quick to choose Alex and so on. The house has reached a decision, it is overwhelmingly for Alex. Jacob and Alex head to limbo. Minutes after leaving the Glass House, Jacob decided to leave the house. Meanwhile, Alex is still in limbo.