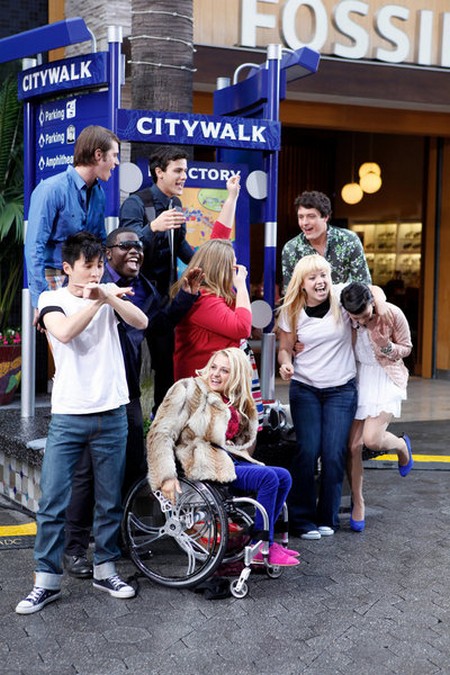 Tonight on OXYGEN is an all new episode of The Glee Project. On tonight’s show Kevin McHale makes his return to the show to guest mentor. If you missed last week’s show called “Sexuality”, we have a full and detailed recap here for you.

After the callback list was posted, Tyler was leaving.  He was, of course, sad to leave, but very grateful for the opportunity.  He realized he can take on huge challenges and rise to the occasion.

“Last season I tried to be a little more honest with [the contestants] because it was getting down to the finals and I wanted to really push them, but this time I told [Glee co-creator and Glee Project EP] Ryan Murphy, ‘Look, I’m going to go all Simon Cowell on them,” Kevin told THR.

Tonight’s Recap: At the start of this week’s episode Aylin and Charlie set ground rules.  No more kissing, snuggling and flirting.  They are going to work really hard to just be friends.  This idea seems to make Charlie very happy, he likes having his boundaries defined.

This week’s theme is adaptability, something extremely important to any performer.  As long as you can adapt, you can (hopefully) work.  Mario is thrilled because as a blind man, he “is” adaptability.  It’s a running theme in every moment of his everyday life.  The song that they are given is “You Outta Know” by Alanis Morrisette and in the name of flying by the seat of their pants, they are not given specific parts to learn.  Lily absolutely hates having no structure and no idea what her part will be.  This isn’t sitting well with her.

Kevin McHale plays wheelchair bound Artie on the show and he is the mentor of the week.  His character is all about adaptability and the fact that Kevin is able to walk just shows these young kids what a good actor can successfully portray.  He tells the gang that the group performance is in fact a solo this week.  The group is horrified but as they take turns, several step up and really do well.  Aylin, Shanna and Lily are all awesome and they really sell the song.  In the end, Kevin chooses Aylin for this week’s one on one mentoring session.

Also in the name of adaptability, the crew has no clue what song they’ll be performing for this week’s video.  They are informed that they’ll find out when they get to the studio and choreography will be taught on set.  Eventually they find out that their video shoot will be set to “Pricetag” by Jessie J.

The concept is rich kids vs. broke kids and then in the end the rich kids befriend the poor kids.  I’m thinking one of these weeks the video concept might not be this lame.  Maybe.  Charlie tries to stay in a ridiculous character that ends up disrupting the shoot.  As usual Charlie seems unprofessional and not like a team player.

Instead of a bottom three this week there is a bottom six with those six being paired for duets.  Up first is Nelly and Blake.  They perform an amazing rendition of Foreigner’s “Waiting for a Girl like You” that gave me serious chills.  Aly and Abraham sang Katy Perry’s “Last Friday Night” and brought a playful banter to it. I actually liked Aly for once.  Charlie and Mario were stuck with the old classic “Don’t Let The Sun Go Down on Me” and it was the least impressive final song.  So unimpressive that Mario was the contestant not called back.  Everyone said their goodbyes’ to him and of course he’s grateful for having the opportunity to learn so much these past several weeks.

Next week should be pretty cool.  The theme is “fearlessness” and I’m betting a few of the remaining kids will do pretty well.