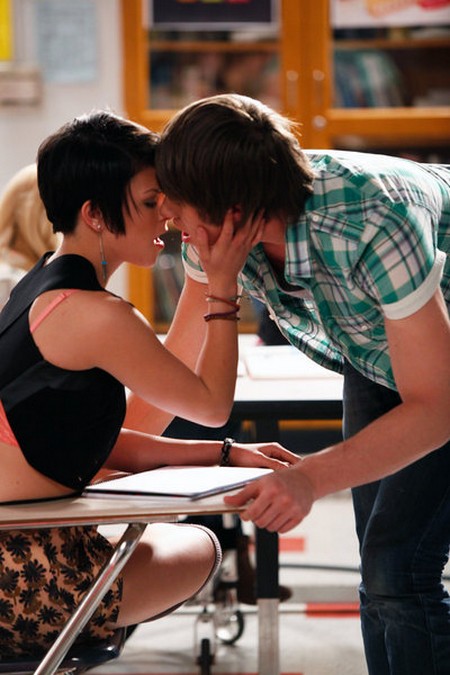 Tonight on OXYGEN is an all new episode of The Glee Project. On tonight’s show the guest mentor is Naya Rivera. If you missed last week’s show called “Vunerability”,  we have a full and detailed recap here for you.

On last week’s show Cory Monteith‘s was the guest mentor. The contenders relive bullying experiences during a powerful performance of REM’s “Everybody Hurts.”

Corey said about last week’s episode, “Glee has always advocated for things like this and anti-bullying is close to a lot of the people’s hearts who run, produce and star in the show, myself and [co-creator] Ryan Murphy included.  It’s high on everyone’s priority list to lend our support to make people more aware that this is happening to real kids every day.”

“The Glee Project” is a groundbreaking, 10-episode competition series from Ryan Murphy, the co-creator and Emmy winning executive producer of “Glee.” The show finds and trains a group of extraordinarily talented performers, who compete against one another to win a guest starring role on “Glee.”

RECAP: It’s Sexuality week, oh boy.  The homework assignment is Color Me Badd’s “I Wanna Sex you up” and yes, I’m scared.   These kids struggle with confidence and are too young to pull of sexy.  Naya Rivera looked as uncomfortable as I felt watching these kids try to be sexy.  Charlie won the round and gets a one on one session with Naya.  She also tells them that this week’s video is a sex-ed mashup of Moves like Jagger and Milkshake.  Two really fun songs, even I’ll admit.

Charlie and Aylin are trying to figure out who and what they are to each other. Michael is losing focus during his part and keeps screwing up his lyrics.

The video starts as sex ed class and turns into a boy vs. girl sex off. Nellie isn’t comfortable with being sexy but you’d never know it here, she owns it. Charlie is trying to change his shot in the video and it’s making the director furious.

I almost hate to admit it, but I really did like their mash-up. As for being sexy, Charlie, Nellie and Abraham really worked it, the rest were okay with good moments here and there. It’s time for callbacks and the three who have to do last-chance performances this week.  Charlie, Tyler and Michael have to perform.  Charlie gets to do I Get A Kick Out of You.  Michael gets to perform Lucky by Jason Myraz and Tyler gets to learn the old classic, Smile.

Charlie gets absolutely lambasted for his unprofessional behavior this week.  It’s not so much his singing as it is his bad attitude. Tyler was on the fringe of the bottom three and his performance of Smile will likely save him for this week.  It’s effortless. Michael sounds great but forgets words and improvises.  They think he takes direction very well.

The callback list is posted and Tyler is leaving.  He is, of course, sad to leave, but very grateful for the opportunity.  He realizes he can take on huge challenges and rise to the occasion.