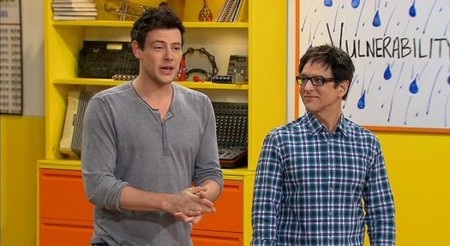 Tonight on OXYGEN is an all new episode of The Glee Project. On tonight’s show the guest mentor is Cory Monteith. If you missed last week’s show called “Dance-ability”, we have a full and detailed recap here for you.

On last week’s show the contenders had to prove they could bust a move for “Dance-ability” week.   A passionate kiss spurned jealousy as the group performws LMFAO’s “Party Rock Anthem.”

Cory spoke to the Hollywood Reporter about tonight’s episode, “Glee has always advocated for things like this and anti-bullying is close to a lot of the people’s hearts who run, produce and star in the show, myself and [co-creator] Ryan Murphy included.”

“It’s high on everyone’s priority list to lend our support to make people more aware that this is happening to real kids every day,” he said.

RECAP: Vulnerability is the challenge this week. These kids have to learn to feel their performances rather than just mouthing words. Their song is Kelly Clarkson’s “My Life would Suck Without You”. Corey Monteith is their surprise guest and all the girls swoon. The gang sounded really good but still, there are weird things. Lily tries to make everything sexy and why on earth did they end holding Ali?? It was just so obvious that she couldn’t stand herself when they picked her up. Nellie belted out her verse and won the homework round so she gets to work one on one with Corey.

They are doing Everybody Hurts and are going to tap into the topic of bullying. The kids all share their own personal stories of being bullied. Blake seems to have the deepest hurt because of his school experiences. Lily shares that she was the bully which isn’t too shocking. By eighth grade she ended up calling the girl that she had bullied, and apologized to her.

Everyone is trying to drop their personal walls in order to connect with the lyrics to REM’s song. They are also shooting Vignette’s for their video, several bullying scenes.

After the video is done we’re up to picking call backs. There are three that have to perform to try and stay in the competition. Mario, Charlie and Lily all need to perform. Lily gets to sing Mercy by Duffy and Mario gets Over the Rainbow. Lastly, Charlie gets to sing Coldplay’s Fix You.

Lily is up first with her rendition of Mercy. She feels like they keep giving her big songs when she just wants to do something simple and vulnerable. Charlie does the best he can with Fix You. It seems a really good fit for him. Ryan Murphy, the judge, was inspired by his performance. Mario already has a strike against him as he begins, Somewhere over the Rainbow. He already hasn’t taken criticism well once, this week and that never sits well with judges.

The Call Back list is posted and all three are called back. Next week tune in for a lesson in sex ed!