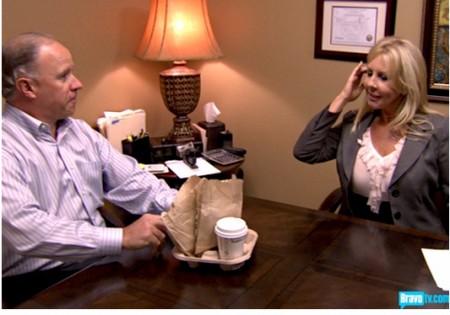 Tonight on Bravo is an all new episode of The Real housewives of Orange County called ‘Will he or Won’t He’. On tonight’s show Gretchen discovers Slade’s plan to pop the big question. If you missed last week’s show, we have a full and detailed recap here for you.

On last week’s episode the ladies traveled to the rainforest of Costa Rica. Zip lining through the jungle canopy had the Orange County ladies screaming with excitement, while their shifting friendships had them screaming at each other.

On this week’s June 12 2012 Real Housewives of Orange County show the ladies have returned from Costa Rica and of course Alexis is still upset about the intervention the ladies had.  They confronted her about her phoney lifestyle.

An on-location segment tests Alexis’ chops as a reporter. Elsewhere, Gretchen discovers Slade’s plan to pop the big question, resulting in a tense showdown between the two. And Tamra is the recipient of a surprise getaway to Bora Bora.

Vicki decides that Brooks must get his teeth fixed.  Keep in mind Brooks is missing teeth and that will just not do in the Real Housewives fake world.  The two head to the dentist and Vicki lets him know exactly what she wants.

Stay tuned for our live coverage of the show tonight at 9PM EST! Meanwhile, while you wait hit the comments and let us know what you think of Season 7 of “The Real Housewives of Orange County” so far!

RECAP: Last time we saw our favorite housewives they were in Costa Ricaplanting trees.  This week they are back in Caliand Vicki is taking Brooks to get his teeth fixed.  Okay, they are “refining his smile” and as Vicki so nicely put it, she is “putting Humpty Dumpty back together again”.  Nice sideways slam there.

Tamra and Eddie head out to dinner and she fills him in on Costa Rica and all the drama that surrounded the trip.  She tells him about her issues with Alexis or “Jesus Barbie”, as she calls her.  Tamra had confronted her on her fake pretentiousness and of course, it went very badly.  Eddie interrupts her to tell her he has planned a romantic trip for the two of them to Bora Bora.

Alexis says she is emotional bruised after being confronted in Costa Rica.  Alexis continues working on her Fox 5 segments and frankly, Im not sure how she landed this gig.  This woman cannot speak in interviews and ends up tongue tied.  Of course Alexis things she can juggle everything beautifully.

Tamra is pretty sure Eddie will propose in Bora Boraso she hesitates to tell the other women for fear she’s wrong.  She gets excited when Gretchen texts her and tells Eddie that she feels more comfortable with her than she does Vicki.  She feels like she tells Vicki what she wants to hear where with Gretchen, it’s all very honest and real..

Heather has recently taken her husbands last name and decides to throw a party.  Party means cake so she stops in at Cinderella Cakes to get something to feed 50 people.  She opts for a structured cake with edible diamonds on top.

Gretchen has been having a lot of problems with her boyfriend, Slade.  He is on the verge of a proposal and she is really backing away from the idea.  Meanwhile, Tamra is spending her entire trip anticipating a proposal from Eddie.  They are enjoying a romantic, candlelit dinner on the beach, but no ring.

Meanwhile Gretchen decides to ask Slade why he is talking to jewelers.  He admits he was on the verge of proposing.  She flips because he hasn’t cleared up his financial messes.  The deadbeat owes in back support and pretty much lives off of her.  It turns into a blowout between the both of them and she reminds him that he is penniless if she breaks up with him tomorrow. Ouch.

She is furious because people assume that because she loves him she condones him not paying child support.  Tamra and Eddie are on their next island adventure inBora Bora-this time scuba diving.  She doesn’t like to dive and is still looking for elusive diamond ring.  Tamra does decide to dive and starts picking out clams from the bottom of the ocean to take home.

Brooks gets his new smile and it matches the new clothes Vicki has bought for him. He is now officially Orange County Brooks.  Obviously her friends are wrong to think he’s using her for her money.  Or not.

We flip back to Tamra opening shells to find pearls. And of course, there is a ring in one of the shells, followed by a proposal and a million tears.  Next week Tamra gets to share her news with everyone.