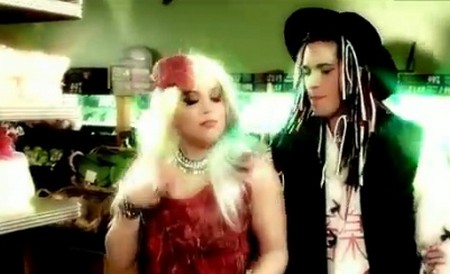 Tonight on OXYGEN is an all new episode of The Glee Project. On tonight’s show Grant Gustin makes his return to the show as guest mentor on “Theatricality” week. If you missed last week’s show called “Adaptability”, we have a full and detailed recap here for you.

On tonight’s show GLEE’s Grant Gustin swings by to guest mentor “Theatricality” week.  One of the newest Dalton Academy Warblers, Grant Gustin, brings a piece of his Glee character to The Glee Project classroom for ‘Theatricality’ week. Gustin was discovered by casting director and on-air mentor of The Glee Project, Robert Ulrich, while he was performing in the first national tour of the Broadway revival of West Side Story.

Tonight we start out with our remaining 8 contenders bagging groceries at a boring supermarket and then they transport to music stars.  Each of the contenders must embody a famous music icon.  The contenders have to learn some intense choreography this week and really don’t want to disappoint Zach.  They pull out all the stops during a video shoot for Pussycat Dolls’ “When I Grow Up.”   Blake has a gay brother!

Tonight’s recap: Tonight eight contenders remain for a guest stint on Glee. This week’s theme is theatricality. The kids have to figure out how to keep it real without over acting. The song they need to do is “I Hope I Get It” from A Chorus Line. Aylin is having a hard time working without Charlie there. Hopefully Grant Gustin from Glee, walking in will snap Aylin out of her funk. The gand does a great job and it’s hard to choose who is best but finally Ali wins the mentoring session with Grant.

This week’s group video is to the Pussycat Dolls When I Grow Up. The contenders are supposed to be grocery clerks that are fantasizing about being superstars. The choreography is super easy because it’s just a series of poses.

Practicing the song with Nicki isn’t going so well for Michael.  She reminds him that he is portraying Elvis this week and no one is bigger.  Abraham isn’t much better than Michael. Nicki asks if he is comfortable being cast as an androgynous David Bowie and he can’t actually answer.  The video shoot itself has most everyone embracing their pop icon but Nellie is struggling to let go a’ la Britney Spears.

The finished project is actually very good.  Anything they struggled with in rehearsal doesn’t show now.

Ali did the best and was first called back.  Michael is being called on the carpet for his confidence issues.  Nellie looked and felt awkward as Britney Spears. They need her to dive in and fast.  Abraham tells Nicki the androgynous comment really hurt him.  Lily dropped the ball because she was herself rather than Cyndi Lauper. Abraham, Nellie and Lily are in the bottom three.  Nellie gets I’m the Only One by Melissa Etheridge, Abraham has to perform Stereo Hearts and Lily gets Adele’s Someone Like You.

I think Nellie’s rendition of Melissa Etheridges’ classic is REALLY rough.  I really like Nellie but she may have sent herself home.  Abraham performed the heck out of Stereo Hearts.  He realizes he let his fear paralyze him in the past week and seems to have real clarity about what he needs to do to stick around.  Lily absolutely kills her Adele song. Then she blows it by running her mouth at the judges.  She drops several F bombs before leaving the stage.

The final callback list is posted and Nellie is sent home.  She feels ready to move on and is happy for the experience.