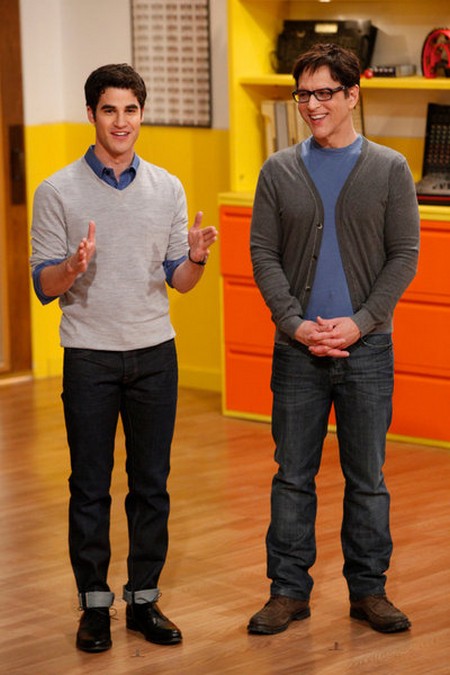 Tonight on OXYGEN is an all new episode of The Glee Project. On tonight’s show Darren Criss (GLEE’s Blaine) lends a hand for “Romanticality” week. If you missed last week’s show called “Tenacity”, we have a full and detailed recap here for you.

On last show Amber Riley swungs by to guest mentor. The shoot for Survivor’s “Eye of the Tiger” left the group frustrated as they tried to do their parts in just one take.

On tonight’s show Darren Criss (GLEE’s Blaine) lends a hand for “Romanticality” week. In a completely shocking turn of events, all the Glee hopefuls promptly lose their cool when Mr. Criss pops his head in the door.

Then, the contenders pour on the passion and romanticism are put to the test by the judges in the music video to Rihanna’s “We Found Love.”  Believe or not Michael Weisman and Lily Mae Harrington team up for the video and they have great chemistry.

Tonight’s Recap: This week’s theme is romanticality. Romantic relationships are at the heart of every Glee episode so it makes sense that the kids need to work on this angle. The song that they have to work on is More Than Words by Extreme. They all decide to partner up this week and keep things simple. Lilly and Aylin decide that they are going to shock everyone and kiss. This week’s mentor is Darren Criss and he’s anxious to see what the gang can do. He likes that everyone stuck to their own idea. Darren thought Blake and Aly were the best with their playful quality. Blake won the mentoring session.

This week’s video is set to Rihanna’s We Found Love in a Broken Place which thrills them. The choreography is simple but requires a real connection if it’s going to be believable.

Blake seems to have the hardest time with the vocals this week.  He isn’t used to doing harmonies and it shows.  He expects to be in the bottom three.

When it comes to the choreography, Aylin and Shanna look to stiff and choreographed rather than like they are having fun and being natural.  When it comes time to play back the finished video, it does look good.  Blake and Aly continue being playful and enjoying the moment.  Lily is paired with Michael and manages NOT to over power him. Shanna and Aylin don’t look like they are faking it on camera either.

Shanna, Aylin and Blake are picked to do last chance performances tonight.  Blake gets to sing Losing My Religon, Shanna has Stronger by Kelly Clarkson and Aylin gets the old Roberta Flack song, The First Time Ever I Saw Your Face.

Aylin is up first and puts her own spin on the old classic.  It’s amazing and at this point I’ll be surprised if she doesn’t win this competition. Blake takes the stage a nervous wreck but he works that out fast and does an amazing cover of REM.  Shanna takes her turn and does as amazing a job as the other two before her.  It’s going to be a tough call because based on their performances no one deserves to go home.

The call back list is finally posted and the group is a mess just thinking of losing a member.  Shanna is the one going home and ironically, this is the first time she has ever been in the bottom.  Tune in next week to see who will make it into the finale!