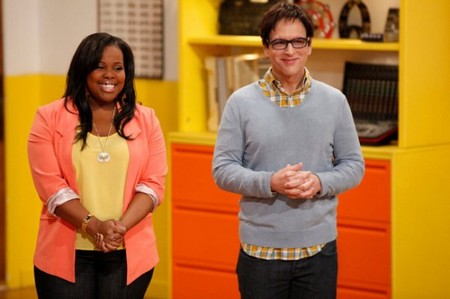 Tonight on OXYGEN is an all new episode of The Glee Project. On tonight’s show GLEE’s Amber Riley swings by to guest mentor “Tenacity” week. If you missed last week’s show called “Theatricality”, we have a full and detailed recap here for you.

On last show one of the newest Dalton Academy Warblers, Grant Gustin, brings a piece of his Glee character to The Glee Project classroom for ‘Theatricality’ week.

The  remaining 8 contenders bagged groceries at a boring supermarket and then they transport to music stars.  Each of the contenders embodied a famous music icon.  The contenders had to learn some intense choreography last week and really did not want to disappoint Zach

On tonight’s show GLEE’s Amber Riley swings by to guest mentor “Tenacity” week. The shoot for Survivor’s “Eye of the Tiger” leaves the group frustrated as they try to do their parts in just one take.

To help the kids reveal what they are made of is Max Adler, who plays the closeted bully on Glee.  Max leads them through their homework, which is to perform the song “Bulletproof”.

The Glee star is there not only to serve as an example of belt-ability in the vocal department, but also as an actor who knows how to push through the pain to get the job done

Tonight’s recap:  It’s tenacity week on The Glee Project and let’s see if these 7 kids can hold their own when things get tough.  The homework assignment this week is Survivor by Destiney’s Child.  This weeks Glee guest mentor is Amber Riley who has stress fractures in each foot.  The gang overall did very well but Aly won the homework assignment which means she gets the mentoring session with Amber.

This week’s music video is set to Survivor’s Eye of the Tiger.  There’s no choreography this week it’ll be shot in one take on an obstacle course.  Shanna seems to have the best vocal for the song while most everyone else is struggling hard.  Michael is about the worst by far.

The video shoot is not going well at all.  If someone makes a mistake then they have to keep starting over from the beginning- hence the tenacity.  Abraham got injured, Shanna threw up in a garbage can and Aly can’t make the last basket to save her life but after 30 takes, they have a video.

The bottom three that need to sing for their lives this week include Lily, Abraham and Michael. Lily’s song is I’m the Greatest Star from Funny Girl, Michael’s song is Brick and Abraham is singing Man in the Mirror.

Michael did his Ben Folds Five song justice.  It’s a tricky song and he held it together.  Abraham absolutely wrecked his song.  Lily, absolutely can and probably will do Broadway.  She admits that she felt good in this performance.

Abraham storms onto the stage and rather than asking to sing again he informed them that he is not going home without a Glee contract. Not a wise move.

The call back list is hung and Lily and Michael are safe for another week.  Abraham is leaving the Glee Project.  Tune in next week as romanticality will be the theme!