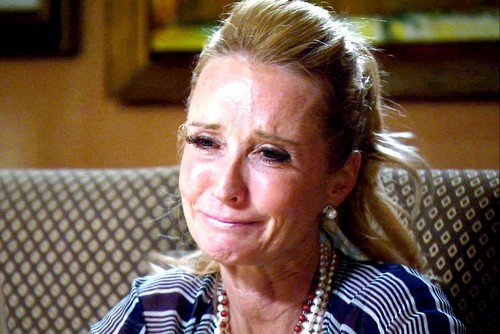 THE REAL HOUSEWIVES OF BEVERLY HILLS returns to Bravo tonight with a whole new episode called “Uh Oh, Somebody’s Crying!.” On tonight’s episode Kim organizes a ladies trip to Ojai and attempts to mend things with Brandi. Kim is ready to quit her job at Ampush and start her own company, but nervously sweats during her meeting with her boss and wonders if she is making the wrong choice. Did you watch last week’s show? We did and we recapped it here for you!

On last week’s show New housewife Yolanda invited the ladies to a dinner party at the spectacular Malibu home she shares with her husband, 16-time Grammy-Award winning music producer David Foster. Taylor was annoyed when David won’t allow the women to participate in an after-dinner sing-along, and the tension between Lisa and Adrienne intensified until they agreed to meet after the party and discuss their issues.

On tonight’s show Lisa and Adrienne’s tense summit meeting comes to a head, and one party is left unsatisfied when the other refuses to apologize for things she’s said in the past. But problems are set aside temporarily when Kim suggests a group trip to Ojai, California, where the women share a five-bedroom mansion on gorgeous grounds. Kim and Brandi start to forge an unlikely bond, but when Brandi is unable to control her potty mouth, things go south with Adrienne.

Tonight’s episode is going to be filled with the usual Housewife drama and you won’t want to miss it, so be sure to tune in for our live coverage of the show tonight at 9 PM EST! While you wait for our recap hit the comments and let us know how excited you are for the premiere of “The Real Housewives of Beverly Hills” season 3! Also we have a sneak peek video of tonight’s show below!

Tonight’s show begins with the much-anticipated sit-down chat between Adrienne and Lisa. At the last reunion Adrienne accused Lisa of selling those infamous “stories” to the press. Adrienne has a hard time apologizing, obviously, but she manages to suck it up and hand Lisa one. Lisa has already said that they’d have no relationship whatsoever until an apology was issued, so it’s done. The question is- how will their friendship continue afterwards.

Kim has formed a pretty fast and equally connected friendship with the newbie of the cast, Yolanda.  She tells her that she is planning a bit of a getaway for all the girls, Kim thinks a trip to lay on a beach in Ohi, Hawaii will do everyone a bit of good.

Didja knows that Brandi wrote a book about her busted marriage to Eddie Cibrian? Well, Michael Brussard is her literary agent and they think her book will sell like mad because of her honesty. As she says, she screwed too many guys, partied to hard and then still had to deal with the fact that her marriage failed.   Brandi is also back to modeling, a career she left in the dust once she had her family. Lisa is helping to boost her confidence at the shoot.

I have to say, Kim really is much better this season. She’s animated and seems pretty happy to be around the group of girls. Kim decides that she’s actually going to try and get along with Brandi on the trip to Ohi. On a great note, former housewife, Camille Grammer is joining the girls on the trip. The ladies get a grand tour of the house that they’re staying at and they realize pretty quick that there are only five bedrooms and that means that some of these divas will have to share rooms.

In the car leaving the photo shoot Brandi talks about her marriage with Lisa and tells her that she wishes she knew that she was being cheated on sooner because she would have been able to end her marriage sooner.  She likes the way that she has picked up the pieces and moved on but she now wishes it happened sooner. She says she couldn’t confirm Eddie’s affairs sooner because she never snooped.

Brandi and Lisa arrive in Hawaii and there’s a bit of awkwardness between Kim and Brandi but they’re both playing nice, so far. The ladies all sit down together and it’s Kim who is asking for everyone to just move on from their bullshit and to just learn to get along.  Adrienne loves that Kim is reaching out rather than retreating.

Brandi tells the ladies about Eddie and his new wife, LeAnn Rimes, renewing their vows after only a year. Kyle and Camille rip Eddie apart and consider it a fake photo op. While everyone is talking Brandi complements Kim on her daughters. Apparently she has somehow raised them very well. Kim is momentarily stunned by Brandi and decides that she might like this chick after all.  They bond over grieving and being single moms. Kim eventually starts to cry because Brandi really is sincere in apologizing and probably the most genuine person there. Meanwhile Adrienne is calling attention to the fact that Kim is crying, but never asks her if she’s ok. Brandi finally tells her to shut the F- up right in the middle of the dinner party. Tune in next week to see the inevitable fall out from this little conversation.