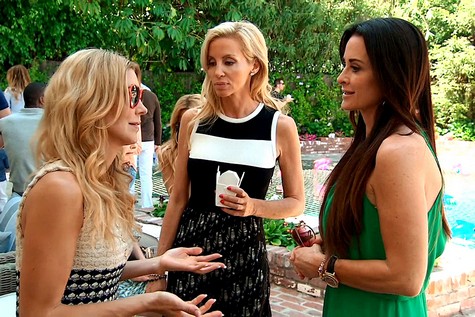 THE REAL HOUSEWIVES OF BEVERLY HILLS returns to Bravo tonight with a whole new episode called “The Higher the Heel, the Closer to God.”  On tonight’s episode Kyle gather the ladies for Portia’s birthday, but tensions continue to simmer between Lisa and Adrienne.  Did you watch last week’s show?  We did and we recapped it here for you!

On last week’s show Adrienne didn’t get the invite to Lisa’s exclusive anniversary party for her restaurant, it was clear the ladies had some unfinished business from last season. New housewife, Brandi Glanville, stirred things up too much for the other housewives last year and was looking to squash the tension, but at a dinner outing to make amends, she ended up saying more than she wished…

On tonight’s show Kyle’s adorable daughter Portia turns four and has a carnival-themed party featuring flying elephant rides, llamas, and unicorns. Kyle’s husband Mauricio arrives late, however, because he and Adrienne’s husband Paul have agreed to help Taylor with a charity event — by walking a mile in women’s high heels! It’s all fun and games until they return, and Adrienne realizes Lisa has avoided her by leaving the party early.

Tonight’s episode is going to be filled with the usual Housewife drama and you won’t want to miss it, so be sure to tune in for our live coverage of the show tonight at 9 PM EST! While you wait for our recap hit the comments and let us know how excited you are for the premiere of “The Real Housewives of Beverly Hills” season 3!  Also we have a sneak peek video of tonight’s show below!

Tonight’s episode begins with Kyle and Adrienne shopping together .  Adrienne is trying to pick a gift for Kyle’s daughter but the conversation takes precedence. Adrienne is still pissed that Lisa didn’t invite her to her party and is contemplating mending fences. The problem is that she wants an apology and that’s probably not gonna happen.

Taylor has invited the gang over for Mexican food and Kyle especially is happy to see Taylor looking so happy.  Taylor wants Maurizio and Paul Maloof to take part in a charity walk for her domestic violence foundation. The catch is that they have to walk a mile in heels. Kyle realizes that in order to take part she will need to bump her daughter Portia’s birthday party up a few hours. Believe it or not, she’s willing to do it!

Adrienne takes Paul high heel shopping to find the highest possible shoe that he can walk in. No one is more amused than he is while trying to walk in the heels. Meanwhile Yolanda has a daughter named Gigi that seems to be launching a pretty successful modeling career at a young age. She has been signed to several agencies already and Yolanda is trying not to be a stage mom- while obviously being exactly that. She keeps talking about how she doesn’t get involved, as Bravo then cuts to a scene of Yolanda bossing someone around.

While the guys are attempting to run a mile in heels the ladies are gathering at Kyle’s for the birthday party, complete with ponies and faux unicorns. Kyle is really hoping that she can sit Lisa and Adrienne down to work out their differences. Kyle assumed that getting them together at her house on neutral ground will work but Lisa is having none of it. She knows that Kyle means well but she wants her to stay out of it. Even Camille shows up to the party which is pretty amazing when you consider how much she and Kyle once hated each other.

I guess now it’s Adrienne’s turn to bitch. She starts trash talking Lisa about how they need to talk. You’ll have to tune in next time to see that conversation happen!