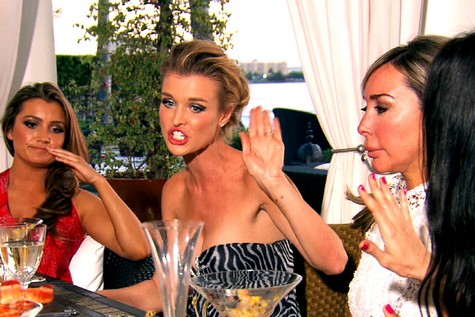 Tonight on Bravo a whole new episode of THE REAL HOUSEWIVES OF MIAMI airs called “A Better or Bitter Place.” On tonight’s show Dealing with the aftermath of “The Slap”, the ladies of Miami come together for a dinner to hash out their differences. Just when things seem headed for a resolution, Adriana claims she never hit Joanna, leading to insults even the cast of the RHNJ would be jealous of! Did you see last week’s show? We did and we recapped it here for you!

On last week’s show show the time had finally come for the Black’s Annual Gala, but tensions were running high between the ladies after Joanna and Adriana’s altercation at Lisa’s lingerie party. Not wanting any drama of her own, Lea enlisted the help of a psychic in the hopes of shifting the energy from negative to positive. As the Gala festivities began, Marysol decided to sit this one out and visited Ana to discuss the “D” word -– DIVORCE.

On tonight’s show The Housewives are more divided than ever. And it’s unclear who’s really to blame. Alexia, determined to get to the bottom of it once and for all, calls for a Summit Dinner. But before Joanna breaks bread with her alleged attacker, she pounds out her frustration alongside Miami’s other sexy beauties at a Model Beach Volleyball tournament. But after her recent bad behavior, Romain isn’t there to cheer her on. Despite suffering a tremendous heartbreak, Lea wipes away her tears and makes it to Alexia’s dinner along with everyone else. In the end it looks like a peaceful resolution is reached — but looks can be deceiving, especially in Miami.

Tonight’s episode is going to be filled with the usual Housewife drama and you won’t want to miss it, so be sure to tune in for our live coverage of the show tonight at 10 PM EST! While you wait for our recap hit the comments and let us know what you think of “The Real Housewives of Miami” season 2 so far! Also we have a sneak peek video of “A Better or Bitter Place” below!

Tonight we start off with Joanna, who is seriously a mega-bitch, complaining about the fact that her boyfriend Romaine is sick of her drunken bad behavior and no longer wants to talk with her. She heads to a celebrity volleyball tournament with Lisa and Karent so that they can sit on the sidelines and stroke her ego.  I love how Joanna thinks she’s as classy as they come but at least a quarter of what she says gets bleeped out.

Ana is going through a rough patch. She and ex-husband Robert have shared a law office for nearly twenty years and she has decided to move out of the practice. Splitting the business seems harder for her than ending the marriage was. Robert seems like a nice guy and he keeps reassuring her that he’s still there and always will be.

Romaine actually shows up at Joanna’s volleyball match and the girls cut out fast. She and Romaine go to sit on the beach and he is still pissed off. This chick just doesn’t get it. She keeps making excuses for her chronically pathetic behavior. He is stopping short of calling her a crazy alcoholic. All Joanna seems to do is apologize for her stupidity. He tells her plain and simple no more drinking or he’s done with her.

Lisa reminds me of a FemBot but she’s actually the one I like the best out of the Miami cast. She seems to have a heart and a brain and both are evident when she sits down to talk to Karent about her infertility. Lisa is frustrated and she feels like less of a woman because she doesn’t know why she can’t carry a baby. She has had three miscarriages and her husband Lenny is getting frustrated too.

Lisa has been helping her housekeeper Daysy to lose weight. The idea was to get her down to her goal weight and then Lisa’s husband Lenny will fix her up. Lisa thought Daysy never had surgery and when she gets into Lenny’s office it turns out that she has had 3 or 4 procedures already!

Lea has a dog named Leroythat has been with her for a bajillion years. Okay, thirteen but ya know, the dog is like family and it was sick. She got a call from the animal hospital and she was told to get there quick because Leroy was crashing. She didn’t make it before Leroy died and Lea is a basketcase over this dog. Now comes the memorial service for him and she has to plan it just perfect. Needless to say, the ladies spend 15 minutes of the show at Leroy’s doggie graveside.

This should be interesting. Alexia decides to invite all of the ladies over to her house for lunch and of course there are ulterior motives. Joanna and Adriana are both present and Alexia hopes they’ll bury the hatchet- just not in each others back. Marysol brings up Karent’s article to the press that bashed all of the housewives. Ana calls Karent on the carpet and asks her point blank while she is involved in every bit of drama that these ladies seem to be having. Lisa momentarily defends Karent and Ana refers to her as Karents life boat. Of course Joanna jumps into the mix because for a second there no one was paying full attention to her! Now we have to take attention off of the real issue, which is how Karent throws grenades and smiles like nothing happened. Instead let’s focus on how Adriana decked Joanna, yet again.

Adriana actually apologizes for putting her hands on Joanna but when it comes time for Joanna to meet her halfway in order to resolve things she just doesn’t see why she has to do that. This episode ends with Adriana walking out and declaring herself over all the drama. Tune in next week to see Joanna’s reaction!