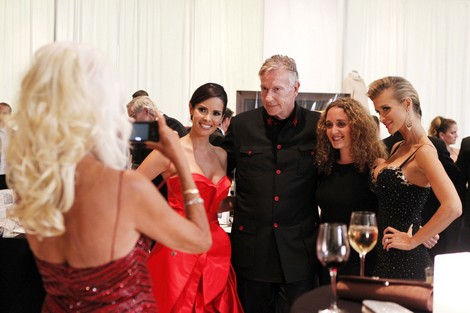 Tonight on Bravo a whole new episode of THE REAL HOUSEWIVES OF MIAMI airs called “Conflicting Conflict.” On tonight’s show the time has finally come for the Black’s Annual Gala, but tensions are running high between the ladies. Did you see last week’s show? We did and we recapped it here for you!

On the last show Lisa’s Lingerie Party continued with a shocking confession from Marta that sent Joanna on a rampage, but Joanna’s fury is put on pause when Elaine Lancaster confronted one Karent’s friends. As Lisa threw a full on tantrum, Adriana became even more convinced that something needed to be done about Karent. The night spiraled out of control as the fighting escalated and the violent aftermath left the party in disarray.

On tonight’s show the time has finally come for the Black’s Annual Gala, but tensions are running high between the ladies after Joanna and Adriana’s altercation at Lisa’s lingerie party. Not wanting any drama of her own, Lea enlists the help of a psychic in the hopes of shifting the energy from negative to positive. As the Gala festivities begin, Marysol decides to sit this one out and visits Ana to discuss the “D” word -– DIVORCE.

Tonight’s episode is going to be filled with the usual Housewife drama and you won’t want to miss it, so be sure to tune in for our live coverage of the show tonight at 9 PM EST! While you wait for our recap hit the comments and let us know what you think of “The Real Housewives of Miami” season 2 so far! Also we have a sneak peek video of “Conflicting Conflict” below!

Tonight’s episode begins with Lea gushing about how crazy she is going trying to pull all the details together for her charity Gala. She has 800 people coming, performances by Queen Latifa and Tony Bennett– in other words it will be nothing like Lisa’s ill fated Lingerie Party!  She has some guy named Norman “blessing” the empty ballroom in his own “crazy” way. It sounds like he is singing the vowels one by one, over and over again.

Adriana heads over to Alexia’s to help her choose a dress for the gala and begins telling her about what transpired at the lingerie party. Adriana tells her that the whole thing started with her needing to talk to Karent and ended up with her decking Joanna.

Meanwhile Marysol is sitting on Mama Elsa’s couch telling her exactly the same story of what happened. Mama wishes that she had been there to get in the middle of the fight so that she could put everyone in their place. Mama also tells Marysol that she wants to go to Lea’s immediately to let this Norman guy read her to see what kind of energy he picks up from her. Marysol is stunned because Elsa never lets anyone near her.

Lea really wants Norman to shift the energy after the fist fight the night before at Lisa’s party. While going through her house with Norman she realizes her dog is laying half dead in the middle of the floor. Lea picks the dog up hysterical because her dog isn’t breathing well- then she passes him off to someone else to take him to the vet. All the ladies are gathering at her house so that Norman can bless them all and clear out the bad energy. Adriana skipped the meeting but the rest of the ladies seem to wish Joanna stayed home instead.

Norman tells the ladies to come up one at a time because he can answer any question they may have. Lisa asks him about children. By now viewers know that she’s been struggling to have a baby for years. Norman tells her she’ll have a boy. Just one child. That doesn’t sit well.  Mama Elsa thinks he is full of crap.

Lea decides to pull Joanna aside to get her side of the story about the fight.  Joanna tells Lea that Adriana hit her first which is not at all what Adriana is saying. Lea has no idea what to do because she can’t risk a fight between them at her event.

Karent meets up with Joanna to get ready for the gala. Karent feels bad because Joanna came to her defense and ended up getting clocked in the face. Frankly, somebody should have decked Joanna a long time ago. She’s a spoiled, self absorbed prima donna. And as usual, her fiancé is disgusted by her behavior and won’t take her calls. He’s probably off with his other girlfriend- the one whose emails Joanna found two episodes ago! At least she has Karent to tell her she looks pretty in her ballgown!

Adriana strolls into the gala and ends up talking to Lisa about the night before.   Neither Ana nor Marysol was attending the gala so they sit and have drinks. Marysol confesses that she spent the night at Phillipe’s home and he got upset because if they aren’t staying married then he can’t move on with her visiting his space. He thinks maybe they should sign the divorce papers to help the hurt go away but clearly Marysol isn’t ready to divorce.

Back at the party, Joanna is throwing back drinks and getting more and more pissed off. Adriana is sitting a few feet away with Joe Francis at her table and Joanna blames Joe now for her deteriorating relationship.  He announced at the lingerie party that he slept with both Joanna and her sister Marta, a little detail that made Joanna’s long suffering guy, Romain, seethe. Romain refused to attend the gala with Joanna and he won’t answer her texts so she’s cursing her head off and getting louder by the second. Finally she starts crying while at the other end of the table Adriana calls her a “super hooker”. It’s about to get a bit uglier so tune in next week for more!