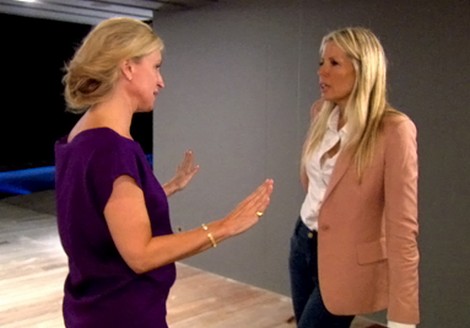 The last time we saw our favorite housewives the ladies arrived in St. Barths, without Aviva who stayed back due to her phobias, and headed straight for their beautiful villa and realized it was first class all the way around. On their first evening Russ, Carole’s boyfriend who was on the island for a blues festival, showed up just in time to meet the women and save the conversation and the rest of the evening.

On tonight’s show the ladies have invited friends over to the villa for a party, but only two people show up — Cat, LuAnn’s old friend, and Tomas, the “Johnny Deep look-alike” from the night before. The ladies think it was Tomas that LuAnn brought back to the villa the previous night and Ramona takes the opportunity to get to the bottom of it.

The next day the ladies head out for a calming and fun day on a yacht. Meanwhile Aviva and Reid are en route to St. Barths, despite Aviva’s fear of flying in small planes, but when they arrive, Aviva doesn’t receive the warm welcome from them that she was anticipating.

Tonight’s Recap: Tonight’s episode picks up exactly where we left off last week, with the ladies buzzing about LuAnn bringing a man home to her hotel room in St. Barth’s. The man is a Johnny Depp look-a-like named Tomas. Ramona decides to toy with him and let on that she (like all the other women) knows full well that LuAnn screwed him in spite of having a long-term boyfriend waiting at home for her. The ladies all sit and have drinks with Tomas and he is working over time to charm Sonja. LuAnn sits down and is obviously trying to cover up something big. The ladies all know what went down and they believe she’s working too hard to cover her ass which makes it all the more obvious that she’ll be in trouble when she gets home.

Heather refers to Tomas as the “greasy prize”and she says that she and Carole are just waiting to see who will bag him tonight. Obviously, it’s Sonja.

Carole later says that a sex act was committed at the house that used to be illegal in 37 states and Heather, who walked in on Tomas and Sonja, verifies this fact. She also says that Sonja’s bruises the next day make perfect sense.

Aviva has decided to suck it up and join the ladies, but she’s bringing her husband Reid with her.  The ladies decided that the house that they’re staying in is big enough to keep the married couple as far from them as they need them to be. Reid makes it very clear that his function is to deliver Aviva to them and then to make himself scarce.

Aviva goes all crazy on Ramona and Sonja, demanding that they thank her husband for bringing her. She is furious when LuAnn tells her that the girls wanted her husband to leave. Aviva actually tells Ramona that she doesn’t need to get naked or Pinot Grigio, she just needs her husband. Aviva also tells Ramona and Sonja that they are “white trash” and quite frankly this chick’s meltdown reminds me of the lambasting that a 68 year old lady would give to unruly neighborhood kids. They can’t even keep up with her barrage of insults.

Ramona starts screaming that LuAnn has instigated the whole fight by saying that bringing a man changes the whole dynamic.  Aviva finds Carole and talks to her with Reid and explains what had just transpired with Ramona and Sonja.  Aviva tells Carole that she needs to either kick out the other girls or else she’s leaving. Carole is just daunted at the notion. Aviva goes back and tells everyone that it’s low class behavior what she is dealing with. Heather jumps on board and insists that they stay. Aviva actually says that she expected the girls to throw her a PARTY just for showing up!

Sonja tries the playful, hugging approach with Aviva. She tries to act like it’s no big deal and Aviva points out that she went to law school and speaks several languages. Why she feels the need to share this I’m not sure. While insulting the other women Aviva is coming across like an entitled snob and I can’t blame the women that want to leave at this point. Aviva is insisting that all the women on this GIRLS weekend go and apologize to her husband, you know, the guy that really is crashing the girls weekend in the first place.

Sonja is through dealing with “ego bitches” and is flipping out turning on the tears. She is losing it over all the drama and it does appear that Aviva landing in St. Barth’s really did ruin this vacation for everyone.

The ladies all attempt to go out to dinner and when Ramona suggests that Aviva change her seat, the claws come out again. Aviva tries yet again to go another round with Ramona. Even LuAnn sees the damage that Aviva has done. She refuses to apologize for calling the girls “white trash” and this fight will clearly continue next week!