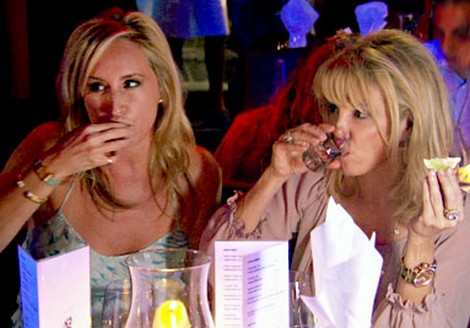 Tonight on Bravo is an all new episode of the Real Housewives of New York called “Pirate Booty Call.” On Tonight’s episode The NY housewives (minus Aviva) take off for St. Barth’s this week, and fly first class all the way! On their first night away Carole introduces her boyfriend Russ to the ladies for the first time. Introductions + heavy drinking = a great mix. If you missed last week’s show called “All How You Spin It” there is a full and detailed recap HERE for you!

The last time we saw our favorite housewives Aviva hosted a charity event at Soul Cycle to raise money for children who need prosthetics. Ramona and Sonja were no shows, which angered Aviva, who thinks that if booze was served, they would’ve showed up to support her.

On tonight’s show the ladies arrive in St. Barths, without Aviva who stayed back due to her phobias, and head straight for their beautiful villa and realize it’s first class all the way around. On their first evening Russ, Carole’s boyfriend who is on the island for a blues festival, shows up just in time to meet the women and save the conversation and the rest of the evening.

A night out at Le Ti has the ladies enjoying tequila shots and a pirate-themed performance, led by the ladies’ liaison, Tomas, a hot Johnny Depp look-alike. The next morning, rumor has it LuAnn kept the party going much later than anyone else.

The ladies have landed in St. Barth’s this week and so you know exactly what that means- the booze is flowing and tempers are flaring.  Sonja is more than a little tipsy as she sits down to her first dinner with the ladies on the island and after suggesting that she wouldn’t mind “f***ing” the chef, she starts to lament her failed marriage.  Somewhere in her boozy marriage confession she drops just enough to lead one to believe that she was her ex-husbands mistress for seven years before being his wife.  Interesting.

Sonja then turns her special blend of crazy back to Heather and that ridiculous photo shoot. This nonsense is all over the branding of a non-existent toaster oven and the fight actually leads all the other ladies to clear out. Carole cuts out to meet up with her kinda sorta boyfriend, a rockstar named Russ.  They meet up for sex every few months and this happens to be the magical night for Carole.

The next day the ladies are a bit bitter about a man crashing their vacation until Sonja sets them straight pointing out that Carole sees the guy every six months and puts up with the ladies husbands all the time. After a day lounging on the beach they all head out to dinner at a place owned by Sonja’s friend. While there she is totally hot for a guy named Tomas, although if you asked her she would definitely say he wanted her bad.  He is dressed like a Johnny Depp character and asks the usually upscale women to take part in his onstage pirate show.