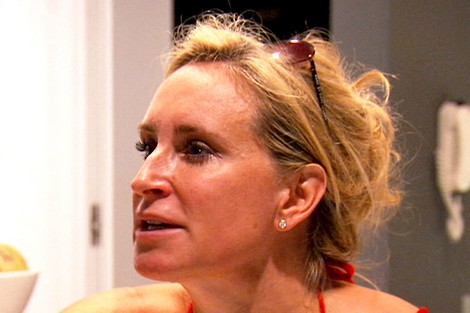 On last week’s show the ladies invited friends over to the villa for a party, but only two people showed up — Cat, LuAnn’s old friend, and Tomas, the “Johnny Deep look-alike” from the night before. The ladies thought it was Tomas that LuAnn brought back to the villa the previous night and Ramona took the opportunity to get to the bottom of it.

On tonight’s show while Aviva, Reid, Carole, and Russ are busy setting up a double date, Ramona realizes that the girls trip she thought they were on has definitely turned into a couples retreat. As Carole tries to explain to Ramona that it will be a quick dinner, the discussion quickly escalates and takes a turn for the worst when Aviva walks in.

On the final night, the women go out for an early drink before taking off to see Russ perform, but Sonja and Ramona add fuel to the fire when they opt to return to the villa instead of going to the concert.

Oh here we go. Last week’s bitching from Sonja and Ramona continues. They are both fuming because their girl’s trip turned coed. The minute Russ and Reid showed up the dynamic completely changed. The two are rehashing the night before and Sonja through her hangover (sunglasses on indoors and all) remembers being called white trash. It’s a term they aren’t familiar with so they decide to google it and find all sorts of nifty references that go hand in hand with it.  Sonja starts saying she can make people feel welcome anywhere, ‘Welcome to my trailer!’ Sonja and Ramona try to explain their unhappiness to Carole, which is overheard by Aviva. You know that conversation makes Aviva go all Gestapo on them.

The crapfest begins again and I’m not sure what is worse, Sonja saying, ‘Yes we are trashy.’ Or Aviva telling them that she expected a banner reading, ‘Rah Rah you did it!’ hanging upon arrival because these two whores know how she fears flying anywhere. I can see anyone going off on Tweedle Dee and Tweedle Dum there but Aviva isn’t winning me over either by scolding them like children. She sounds like a dorm mother from the 50’s when she says, “I know that you’ve had MEN here late at night.”

Really? Sonja likes the world to know what a whore she is and Ramona is right beside her, along for the ride – quite literally.

The girls try to go out to lunch and it turns messy right off the bat. Carole gets up and leaves in tears as Aviva insists that she doesn’t want to be the center of attention, but keeps making herself exactly that. Heatheris sick of all of it and says as much.  She finds out that the two couples are heading off to dinner and flips out because now she feels lost in the shuffle. She left her family behind to spend her time with two selfish women and two that took a girls trip and made it a couplefest. Heather heads for the beach and Carole follows her and the two have a real conversation and bond.

Aviva informs Sonja that she and Carole are going to dinner with their guys and then inflames Sonja yet again. She all but calls Sonja a whore, in between calling her the biggest double dealer on earth and flips out when Sonja reminds her that it was originally a girl’s trip.  Aviva is now incorrectly insisting it was never a girl’s trip. Perhaps she’d like to take that issue up with Heather who is now also furious with her Holier than Thou behavior.

Carole decides to treat the girls with massages on their last day in St. Barts.  Sonja actually mentions her bruises – from walking in the garden with Tomas!  She then says the only time she kisses the ground is when Tomas is humping her from behind in the back of the garden! Well, she did say that she’s trashy, now didn’t she? At least she owns it.

Carole also planned a farewell dinner for all the girls that is about to go down in absolute flames. Ramona and Sonja are both drunk and Aviva seems manic while begging tweedle dee and dum to go to an extremely late dinner with them.  Ramona is screaming that the ladies are boring while Sonja is trying to stand up while blow drying her dress.

Aviva refers to Sonja as a ‘legend in her own mind’ that’s on a downward spiral. I think that is by far the best assessment of Sonja ever.

The girls wrap up the trip to St. Barts with a dip in the pool. All of the ladies jump in while fully dressed. Sonja, being Sonja, ditches her dress and skinny dips. How will the ladies get along once back in NYC? Tune in next week to find out!