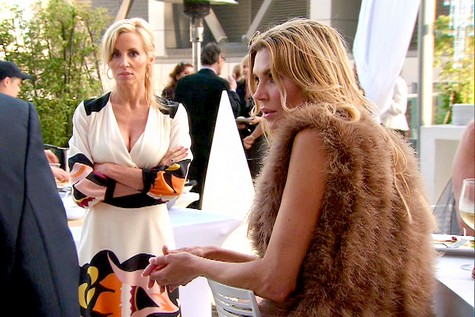 THE REAL HOUSEWIVES OF BEVERLY HILLS returns to Bravo tonight with a whole new episode called “She’s Gone Too Far.” On tonight’s episode the ladies head to Lisa’s food tasting event and Brandi fears she’ll run into the waitress who had an affair with her ex-husband! Brandi diverts everyone’s attention by revealing very personal information about Paul and Adrienne. Did you watch last week’s show? We did and we recapped it here for you!

On last week’s show still in Ojai, the women had a hard time understanding Lisa’s defense of Brandi’s language at the dinner table. Brandi and Taylor exchanged angry words as well, but the group lightens up the following day, having fun in a golf cart race, at a mud-filled spa and, late at night, in a drunken gymnastics and arm-wrestling contest that was the opposite of ladylike. However, the problems between Brandi and Adrienne had just begun.

On tonight’s show though Kyle surprises her daughter with a present every 16-year-old would want, the happy times in Beverly Hills won’t last for long. Lisa has a food tasting at one of her restaurants, but Brandi fears she’ll run into the waitress who had an affair with her ex-husband. At the tasting, when asked about her issues with Adrienne, Brandi reveals very personal information that Adrienne has always kept private. When Kim tells Adrienne what Brandi revealed, Paul and Adrienne are livid — and a battle of epic proportions begins.

This show is always a walking billboard for Lifestyles of the rich and famous and tonight’s’ show begins with Kyle’s 16 year old daughter, Alexia,  being surprised with a brand new sports car.  Spoiled rotten? Of course! We quickly move on to Brandi having lunch with the creative force behind her book. They are trying to work out the details of the cover and the title. Brandi just needs the whole project to be true to who she is.

Lisa is a nervous wreck because Ken is on the verge of hip replacement surgery so she has all of the ladies join them for lunch. In breezes a momentarily sober Taylor but I’m betting that is doesn’t last for long. What is up with this crew? Once Kyle shows up everyone greets each other by kissing the air near each others cheek. They sit down to eat minus Adrienne and for once everyone really is getting along. Something weird goes down at dinner though. Brandi drops some sort of bleeped out bombshell about Adrienne and Paul that viewers can’t hear, but we can imagine it since the Maloof’s are now in the midst of an ugly split!

Camille Grammer is back on tonight’s episode and she and her new boyfriend Dimitri are attending one of Mauricio’s work parties. He is one of the top real estate agents in the country and is showing some of his condos at the party. Camille shares that Dimitri has made her believe in love again and one of the huge differences between him and Kelsey is about 8 inches!

It’s time for Ken’s surgery and Lisa is a mess. She’d rather go in herself than send Ken who is 16 years older than she is. She knows that the surgery is routine but there’s always the chance that things can go wrong. Of course Ken pulls through just fine and is joking around with his super model nurse almost immediately.

Adrienne and Paul show up for Mauricio’s party and Kim decides to run and tell them everything that Brandi had said the day before. I’m not sure what’s up her. I thought that Kim and Brandi were actually getting along okay so I’m not sure why Kim ran and ratted her out. Paul is flipping out about the comments that were made (that the entire viewing audience still is in the dark about). Adrienne is calling it complete character assassination. Paul decides to confront Brandi in the middle of the event, at the top of his lungs. Mauricio’s work related party has now turned into a war of words between the Maloof’s and Brandi and let me tell you, Brandi isn’t being intimidated by Paul’s threats. I’m not sure if the rumors of him being a violent hothead are true, but in this scene I can definitely believe that he might be. The only reason his hands aren’t around Brandi’s neck is because they have a huge capitive audience.

Kyle is ready to literally kill Kim for opening up Pandora’s box at Mauricio’s event. She can’t believe that her sister can be this stupid. Wait until you see Mauricio’s reaction next week!