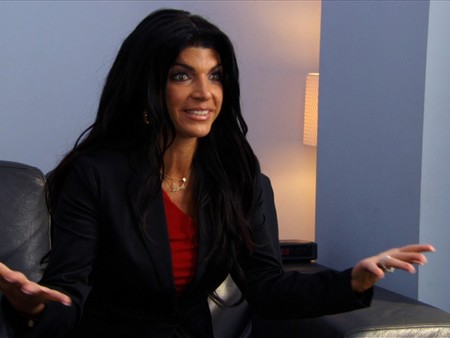 Tonight on Bravo is an all new episode of the Real Housewives of New Jersey. On tonight’s show Teresa Giudice and her brother, Joe, finally go to therapy, but both of them can’t seem to get over the past. If you missed last week’s show called “Public Display of Rejection” there is a full and detailed recap HERE for you!

Spoiler alert: If you’re one of those people who doesn’t like spoilers, stop reading now! We have some juicy spoilers for you about the season 4 episode 10 of Bravo’s “The Real Housewives of New Jersey!”

The last time we saw Teresa she had decided to make a big move forward with her brother, but Kathy was suspicious of her motives.  Teresa and Jacqueline faced-off again after their last blowout at Melissa’s radio debut party, ending their 15-year friendship for good.  As usual there was tons of drama!

Bravo official synopsis of tonight’s show “Temporary Shrinkage”: Teresa gets a surprise visit from her cousin, Rosie who is determined to clear her sister’s good name.

Teresa and her brother, Joe, finally go to therapy, but both of them can’t seem to get over the past. Jacqueline and Caroline also discuss whether or not they’ll be including Teresa and her husband in their trip to Napa… Things get wild when Kathy and Rosie hits up the gay bar scene together, and a surprising visit from Rosie to Teresa, shows that not all of Teresa’s family has given up on her.

Tonight’s episode is going to be filled with the usual Housewife drama and you won’t want to miss it, so be sure to tune in for our live coverage of the show tonight at 10 PM EST!  While you wait for our recap hit the comments and let us know what you think of “The Real Housewives of New Jersey” season 4 so far!  Also we have a sneak peek video of “Temporary Shrinkage”  below!

Tonight’s recap:   Here we go, another episode of the Teresa show.  The broke housewife and her shady husband Joe are still building a garage on their property. Teresa uses it as a photo op for her girls.  She dresses them identically in overalls and takes pictures of them pushing a wheelbarrow. Rosie shows up to talk to Teresa about all the tabloid crap.  Ro confronts her on whether or not Teresa is planting stuff in the media again.  C’mon already.  If everyone says Teresa admitted to planting stories why are we discussing it every week.  We already know that Teresa says and does whatever it takes to make it into the tabloids.  Teresa also tells Ro about how she’ll be going to therapy with her brother.

Joe Gorja is sitting down with Cathy and Rosie and he tells them he is contemplating therapy with Teresa.  Ro poses the question that is on everyone’s mind, is Teresa trying to fix things with the family because she (at least momentarily) has lost Jacqueline and Caroline?

Caroline and Jacqueline are having dinner together with their families and they seem pretty united in the fact that they want nothing to do with Teresa.  Meanwhile Kathy and Joe and Melissa are prepping their Sunday dinner.  In her words, “If you’re Italian and from New Jersey, Sunday means family.”

Caroline and Jacqueline are worried sick about Ashley’s plan to move to LA all on her own.  Jacqueline says she will not enable her daughter any more and that Ashley will be on her own in LA with no job and little money. As her husband put it, ‘She’s giving her just enough rope to hang herself.”

Teresa decides to lie to her girls and tell them she is going to lunch with her brother Joe, rather than tell them it’s a therapy session. Joe believes that therapy is all that will save their relationship.  He doesn’t believe he’ll get his old sister back but he is hopeful he may learn to like this version.

Jacqueline is still broken up over ending her friendship with Teresa.  She’s taking it all like a bad breakup and the shame in the matter is that while she is crying over the loss, Teresa could care less.

Teresa goes in to talk to the therapist  first as Joe waits outside.  She basically rips Joe’s wife apart, as usual.  It’s the same old story, Melissa pulled Joe away from Teresa and she lost her brother. She’s never done anything to disrespect him, blah blah blah.  Obviously Teresa has no idea how she treats her brother or comes across to others.  This therapist tells her he thinks she has a bad temper and does a lot of stomping away from disputes.

When it’s Joe’s turn to talk to the therapist it goes much better. He explains that Teresa puts down his wife and it chases him away.  The therapist seems to believe and side with Joe. He brings Teresa back into the room to talk. He suggests they let the old grievances go and aim to have Sunday dinner together in the present tense.  She wants to rent an RV and have both of their families drive together to Napa. The therapist strongly believes it’s a horrible idea and of course, Teresa wants to prove him wrong. Joe decides to bring up the situation with their parents. Joe has supposedly sold his parents home out from beneath them and Teresa and Joe are going to put them up- according to a tabloid. A huge fight breaks out. He is mad because Teresa makes herself look good in the press, yet her brother has picked up the tab for 12 years.  Tune in next week to find out if these two will resolve this confict or if it’ll escalate like usual.