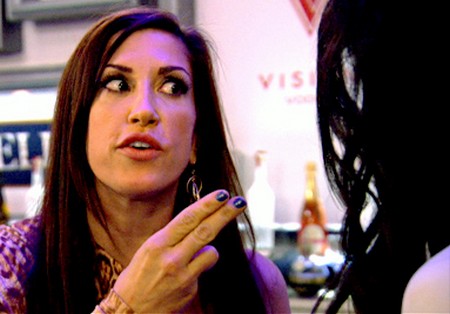 Tonight on Bravo is an all new episode of the Real Housewives of New Jersey. On tonight’s show Teresa sets out to make amends, but her true motives are put into question. If you missed last week’s show called “Best Friends For Never” there is a full and detailed  recap HERE for you!

On tonight’s show called “Public Display of Affection” Teresa decides to take a big step forward with her brother, but Kathy is suspicious of Teresa’s motives when she attempts to make things right with her. Jacqueline locks herself away following her emotional fallout with Teresa but the two come face to face again when Melissa hosts a party for her radio debut with Ryan Seacrest.

The party plays back drop to infighting and family bonding as Teresa moves further away from Jacqueline and Caroline and closer to family.  Melissa has to face the music when Teresa questions her communications with Danielle Staub.

Teresa and Jacqueline face-off again after their last blowout at Melissa’s radio debut party, ending their 15-year friendship for good.  Teresa also makes a final decision about going to therapy with her brother, and leans on her sister Kathy when it seems she’s at a loss for allies.

Tonight’s episode is going to be filled with the usual Housewife drama and you won’t want to miss it, so be sure to tune in for our live coverage of the show tonight at 10 PM EST!  While you wait for our recap hit the comments and let us know what you think of “The Real Housewives of New Jersey” season 4 so far!  Also we have a sneak peek video of “Public Display of Affection” below!

RECAP: Last week we watched Teresa’s friendships with Jacqueline and Caroline completely melted down and it ended with both ladies opting to distance themselves from Teresa.  The way Caroline puts it, “With friends like you who needs enemies.” Jacqueline doesn’t deal with drama well and she seems pretty cut and dry in spite of the bucket of tears she is crying.  She is finished with Teresa.

Of course Teresa is talking to Joe and he is insulting all the ladies and every time Teresa gets emotional he doesn’t want to hear it.  He is obnoxious and just horrid.  I have NO idea why Teresa stays with and supports this guy.  He tells her repeatedly to just, “move on” and so she decides to call Cathy to schedule lunch.  Not that they are close or anything, but Teresa needs someone to talk to!

Teresa meets Cathy for lunch and it becomes apparent pretty fast that Teresa is just looking for back up.  Cathy walks the thin line.  She refuses to say anything bad about her friends, but still offers support.

Melissa Gorga decided to try and sing and Ryan Seacrest decided to put her song on his radio show.  We get a quick listen and listen in on a bit of her interview with Seacrest.

Teresa talks to Joe about considering going into therapy with her brother.  She thinks they need a mediator, in spite of her family frowning upon the idea.  She feels she has to do whatever she can to try and fix it.

Melissa’s single launch party is where all the ladies are meeting up to celebrate.  Cathy decides to talk to Caroling and Jacqueline together, to get the other half of the story that Teresa told her.   The whole vibe is just awkward.  First you have the fact that Melissa can’t really sing, yet has a single out.  Then there are all of Teresa’s feuds all in one spot.  She hates Melissa, has burned bridges with Jacqueline and Caroline, then things are rocky with her brother.  She does approach him though to discuss the possibility of them sucking it up and going to therapy together. He is happy to try anything that may repair their relationship.

Jacqueline can never let anything go, so she decides to try and have a conversation with Teresa to try and hash stuff out.  She should know better because that just never works out well.  Teresa loves a good fight and thrives on all the drama and nonsense.  It might be Melissa’s night, but Teresa and her drama has clearly stolen the spotlight right out from underneath her.  Melissa tries in vain to squash all the drama in the room, but doesn’t have very much luck.  It looks like we’ll have to tune in next week to see if the girls can get along at all.