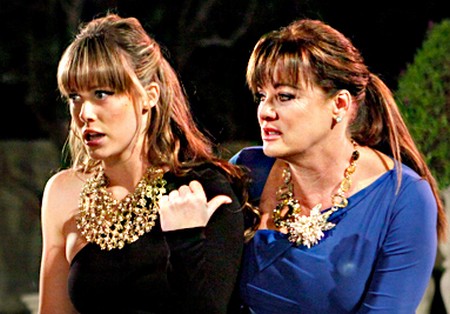 Tonight on Bravo is an all new episode of The Real Housewives of Orange County. On tonight’s show, the first part of the season finale Vicky gets a new mink coat. If you missed last week’s show “Will He Or Won’t He”, we have a full and detailed recap here for you.

On last week’s show the ladies returned from Costa Rica and Alexis was upset about the intervention they had for her.  The ladies decided to confront her about her phoney lifestyle, much to her displeasure.

Vicki decided that Brooks must get his teeth fixed.  Keep in mind Brooks is missing teeth and that will just not do.  Vicki goes to the dentist with Brooks and makes him clear what he wants.  Tonight we will get to see what his new chompers look like.

On tonight’s show in the season finale: part 1, roles are reversed as Brooks spoils Vicky with a new mink coat. The ladies also face Alexis for the first time since she stormed out of Costa Rica early. Ex-housewife Jeana returns at Heather’s party, but surprisingly isn’t the source of the main conflict (for once!)

Who would have guessed eating cake could cause spark such an uproar?  Heather Dubrow gets very ticked off at Sarah for ruining her cake.

RECAP: It’s time for another episode of our favorite housewives and tonight is sure not to disappoint. We start off with Tamra showing off her ring and sharing proposal details over dinner with Heather and Gretchen. Tamra worries that Gretchen may feel bad because of her not so great situation with Slade, but Gretchen seems genuinely happy for her.

Alexis meets up with her friend Sarah to discuss Costa Rica. You know she is going on and on about how the girls all ganged up on her. She claims to have called all of her friends to ask them if they think she’s phony, and they said no! Obviously Alexis needs to find new friends because the current batch lies to her! Anyway, Sarah volunteers to go to Heather’s party as Alexis’ date. That should be interesting.

Heather is going over party plans with Brian, her planner. It’s her first bash as “Mrs. Heather DeBrow” and her legal name change is the whole point of the party.

Well, Brooks just gave Vicki a fur coat. Maybe that will shut up the multitude of people that believe he is an opportunist just using Vicki for her money. More likely, it’ll make them all wonder where he stole the coat from.

The girls are all on their way to Heather’s party discussing with their car mates the Alexis situation and the obvious conflict heading into the night. Heather is talking to her hubby Terry, wondering if Alexis will confront him at this party too. She reassures him that she’ll open her mouth if necessary.

Heather’s house is all decked out. Tamra likens it to a “Hotel”. Alexis and Sarah walk in and Heather isn’t happy to see Sarah. She likens her look to that of a “Vegas stripper”. Alexis acts like everything is fine between her and Gretchen but if you saw the Costa Rica episode, you know they are not fine. Gretchen agreed that she was pretentious and Alexis is still fuming.

Sideways comments are flying about Vicki’s coat. It’s only a matter of time before she over hears something.

Ex-housewife Jeana shows up and Tamra’s blood boils. She flashes back to throwing a drink in her face last year because she kept defending Simon, her ex.

While Tamra stews, Alexis hauls Sasarah into the bathroom to try and sober her up. The Vegas stripper look-a-like is clearly drunk and getting really sloppy.

Eventually Jeana, Tamra and her daughter all sit down and discuss the whole wine throwing incident. They talk, they cry, it’s all better.

Sarah just ate the bow off of Heather’s cake and all hell break’s loose. The best thing about this cat fight is when Sarah insists that she has a sugar problem and that’s why she ate the bow. This whole thing is hilarious.

Heather is losing her mind so Sarah lashes out and starts calling Heather fake. Heather addresses Sarah’s sugar problem by offering her an oreo. Just as things heat up we have to return next week to see the other half of the finale!