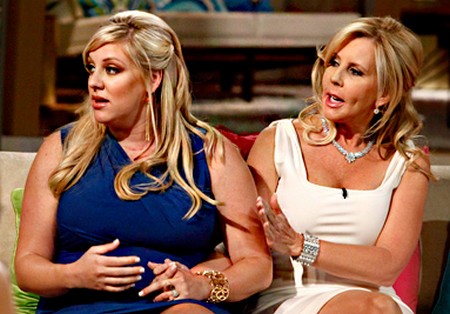 Tonight on Bravo is an all new episode of the Real Housewives of Orange County called “Reunion Part 2”. On tonight’s show if you thought Part 1 was action-packed, hold onto your seats for Part 2… The ladies address Vicki’s questionably genuine relationship with Brooks, and Briana brings up the topic of her mom’s past infidelity.  If you missed part 1 of the reunion show there is a full and detailed recap HERE for you!

On last week’s show the Orange County ladies reunited with Andy Cohen to hash out the most dramatic season to date! Alexis demanded an apology from the ladies for calling her phony, and the girls fight right back with specific examples of her insincerity. Surprisingly, it’s was a past enemy Vicky who came to Alexis’ defense…

On tonight’s show in part two of The Real Housewives of Orange County reunion, Vicki’s relationship with Brooks takes center stage when he stops by to give the ladies a piece of his mind. When Briana joins the group, Vicki’s fidelity and Brooks’ motives are called into question as accusations against the couple arise.

By the end of the reunion, friendships are frayed, new alliances are formed, and the women’s relationships with one another may never be the same again.

Tonight’s episode is going to be filled with the usual Housewife drama and you won’t want to miss it, so be sure to tune in for our live coverage of the show tonight at 8 PM EST! While you wait for our recap hit the comments and let us know what you thought of “The Real Housewives of Orange County” season 7! Also we have a sneak peek video of tonight’s show below!

Tonight’s recap: Part two of the reunion show starts off with a bang. Alexis and Gretchen were best friends up until this season and the whole first segment deals with both women hashing out the details of their feud. When all of the housewives confronted Alexis and basically called her pretentious, Gretchen did not defend her, but instead agreed that she comes across that way. This is a deal breaker for Alexis (who IS as pretentious as they come!). It’s friendship ending. Also alexis had a hosting gig at Fox 5 on Friday morning’s and Gretchen told her the position was first offered to her. She then whipped out the emails to prove it! Still Alexis insists that her producer swears the job was never offered to Gretchen (Even though she wrote the emails!). Tamra gets the final word by asking Alexis if she still has the job. Of course not!

Anytime you bring Brooks into the equation there’s a problem.  These ladies hate him and I have to think at some point Vicki should pay attention to her friends instincts because they are obviously better than hers.  This guy is shady as can be and Tamra calls him on it.  Heather tells him she saw an aggressive side she didn’t like.  Red flags galore here.

Gretchen and Slade’s relationship has been bumpy to say the least.  He has huge debts that she wants cleaned up before she will marry him.  It also seems that he has used her as his excuse not to get a real job.  This topic sends Vicki flying because Brooks also has huge child support debts hanging over him. Since Vicki hasn’t listened to her friends, her daughter Brianna now takes a seat.  Of course they discuss Brianna’s surprise pregnancy and how the baby will be named Troy.

We also get to see footage of Brianna’s real wedding thrown by Vicki.  She also tells her mom that she believes Brooks loves the lifestyle that is being offered  He has also hurt her by outting her pregnancy and giving up wedding details.  Brianna says it affects things, Vicki swears it means nothing.  Wow is she blind!

Ending the season, Heather is glad to have met everyone and Alexis is simply glad it’s over.  Gretchen is thrilled she and Tamra are friends and she is excited about work.  Tamra cals it a year of thrilling changes while Vicki considers herself under construction.  Vicki also she admits she is worried about her relationship with Brooks.