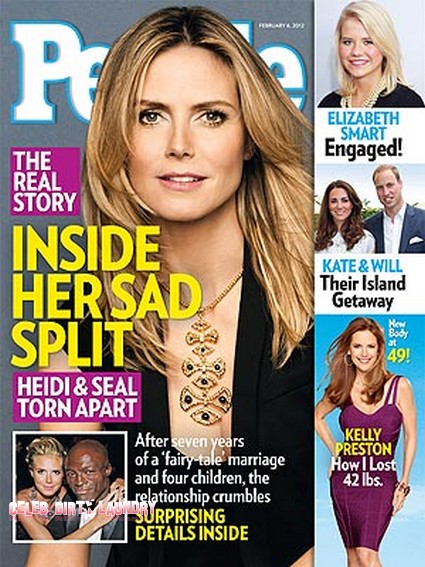 The current issue of People Magazine features the cover story ‘The Real Story – Inside Her Sad Split.’  After seven years of a ‘fairy-tale’ wedding the relationship of Heidi Klum and Seal has crumbled.  The couple have four kids. Six year old Henry Samuel , five year old Johan Samuel and two year old Lou Samuel . Seal adopted The Project Runway star’s daughter Leni Samuel – aged 7 – when they got married in 2005.  The magazine has all the surprising details of why the couple was torn apart.

People has more: “They were just really great at keeping it private and putting on that ‘perfect couple’ front that everyone expected,” says a Klum pal. But “it’s actually been about six months that they’ve been working through some issues.  “It was a crazy love affair with highs and lows,” says a source close to the couple, known for their over-the-top romantic gestures and lavish anniversary parties. “Most people can’t sustain the highs when they’re that extreme.”

Seal has poured his heart out to Ellen DeGeneres less than 24 hours after announcing his split from Heidi.  He said, There was no bitterness – just praise for his soon to be ex wife ‘The thing that I’m most proud about this great woman who I married (and I really do mean that from the bottom of my heart), is that together she has given me four incredible gifts…four beautiful children. She is still, in my opinion, the most wonderful woman in the world. I think our priority was to remain civil and do this thing with dignity.

Seal is still wearing his wedding ring – he says it is a token of how he feels about Heidi.  Meanwhile we have been hearing rumors that Heidi was shopping around for divorce lawyers for the past couple of weeks.  What do you think is there hope for their marriage?

For more on the real story behind Heidi and Seal’s shocking split, pick up the upcoming issue of PEOPLE