‘The River’ Episode 3 ‘Los Ciegos’ Review — Have You Found The Magic Yet? 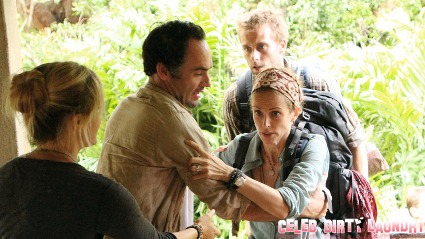 The River aired last night on ABC and definitely delivered a few more chills and thrills to keep its audience awake. The second episode of the season, entitled ‘Los Ciegos’, had the crew traveling up river — still on a quest to locate missing researcher Dr. Emmet Cole. They’re getting closer and closer to finding him, but I don’t think we should start planning the “WELCOME HOME” party anytime soon. The River holds many mysteries. And, as we continue to see each week, those mysteries don’t involve fluffy unicorns or warmy-fuzzy teddy bears.

Official Plot Summary: When the whole crew of the Magus goes blind due to spores from a tree, lone holdout AJ will have to overcome his most paralyzing fear to find a cure before the blindness becomes permanent. Meanwhile, the local Morcego tribe stalks the crew and judges whether they are worthy to stay in the jungle. If they are deemed unworthy, the consequences could be fatal.

In last night’s episode, the crew traveled up river after gaining a few more geographical clues from Dr. Cole’s old tapes. When they got off the boat and started hacking their way through the forest, they came across a pictograph: an eye. Jahel, the character responsible for providing our link to the other world, told everyone that it’s the symbol belonging to the Morcegos Tribe — an unforgiving group of people that punishes others for being selfish. Jahel warned everyone that the tribe was watching them and judging them, seeing if they were worthy enough to travel through their lands.

And tested they were.

As the crew slept, we saw one of these mysterious tribesman silently invade the camp. When the crew awoke the next morning, they found several mysterious markings surrounding their tents. One by one the individuals began going blind and throughout the entire episode we see the ghost-like figures of the Morcegos, silently stalking and hunting their prey. Clark, who was “accidentally” stabbed by Curt in the middle of the episode, offers himself up to the tribe in an act of desperation to save the others. This was a redeeming moment for Curt’s character, and an especially needed moment at that.

While Curt is definitely an antagonist, I’d refer to him more as the “good” antagonist. We see a much stronger villain in Clark, the security specialist, who is going behind the entire crew’s back by communicating with an organization in the outside world. He’s trying to prevent the crew from not only finding Dr. Cole, but from also discovering the illusive “Source,” a nexus of magic that powers the mysterious phenomena in and around The River.

This, just like the first, was an enjoyable episode to watch. While the acting is still so-so and the amount of “convenient cures” to their supernatural problems is quite shocking (ridden with blindness? No problemo! Dr. Cole just happens to have a journal that details where to find a magical bulb/root to cure your ailment), the thrill, suspense, and magic is still there. I find this world, rooted in folkloric mystery and superstition, immensely interesting and offers a fun change of pace from all the other supernatural dramas out there (which, as you might know, I love with great passion).

Official Plot Summary: As the search continues for Emmet and his crew, the Magus comes across one of Emmet’s crew members who went missing alongside Emmet. They soon discover that he’s been cursed and learn the mystical story behind the curse, which is now a matter of life and death. Lincoln faces a challenge when the rest of the crew want to leave their plagued colleague behind to continue the mission, and he must try to be their moral compass.

Will you tune in next week for The River? Let us know in the comments section below! Do you like the show?