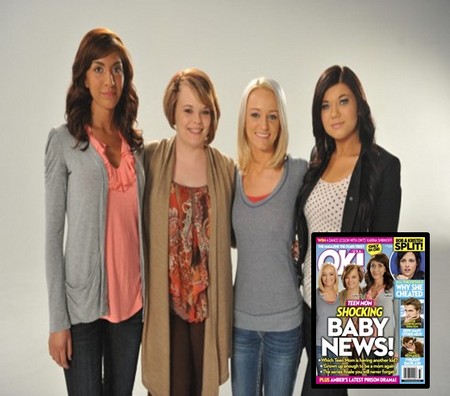 The latest OK! Magazine cover delivers some shocking baby news for the Teen Mom cast! The magazine cover asks,“Which Teen Mom is having another kid? Is it Maci Bookout, Catelynn Lowell or Farrah Abraham?”

The cover shows three of the Teen Mom cast members and states that it is “the series finale you will never forget!” Don’t worry OK! Magazine, we will easily be able to forget the feeble misfits from the show!

Why would these Teen Moms have more kids? Their first attempt at motherhood was wrought with fame whoring, television hogging and more issues than an overweight teenager. Their stomachs should have a huge sign on them that reads “New Baby: Coming Soon!” Perhaps then people will pay more attention to them?

The magazine also quotes one of the teen mothers, “Grown up enough to be a mom again”. How can they possibly be grown up enough? These women have documented their teenage pregnancies while having made a mockery of not only motherhood, but also their own kids. They fail in all aspects of social etiquette and they definitely lack the proper skills to have “careers” outside of the fame whoring planet they’re from.

The magazine also draws attention to Amber Portwood’s latest prison drama, where she is sitting in the corner of a cell, too afraid to move, because a lesbian named “Dumbo” is heading at her with a sharpened toothpick. She might have already been stabbed in the face, but at least it’s another way to remove all that nasty prison food from your teeth, now isn’t it Amber?

Read all about Teen Mom and the drama they have created in the latest issue. Remember to not get paper cuts – we hear Dumbo loves the smell of blood in the morning!