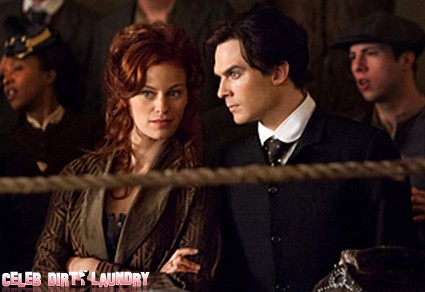 Tonight’s episode of the Vampire Diaries was all about Esther with the help of Bonnie and Abby trying to kill her sons and daughter and them trying to stop it from happening.  A preview for The Vampire Diaries episode 16 has been released and it is called ‘1912.’   We have a sneak peek of the episode, some spoilers and a picture from the episode for your enjoyment.

On tonight’s episode Elena found out that Damon slept with Rebekah and she was none too pleased about it.  The girl seriously has to make her mind up about who she wants Damon or Stefan.  Most of tonight’s episode was surrounded around Elijah trying to find a way to stop Esther from killing him and his siblings.  He enlisted the help of Damon and Stefan by kidnapping Elena.  If you missed the episode you can read our official recap HERE!

On the next episode called ‘1912’ we meet a new Gilbert in flashbacks.  Her name is Samantha Gilbert and she was one of the town’s founding family members who interacts with both Salvatore brothers.  We will also meet a new character called Sage.  This character will be connected not only to Damon and Stefan but to The Originals.  Smallville’s Cassidy Freeman has been cast to play Sage and she told TV Guide, “expect her to be pretty badass and she will find herself in some, ahem, compromising positions.”

In the preview video Stefan is talking to Damon and he says, “Remember Sage?” and we see a flashback of a women in a boxing ring fighting a man and she wins.  Damon responds to Stefan, “She taught me how to have a good time.”  Sage says in a flashback, “A women isn’t just for food, she’s for pleasure.” and then we see Damon kissing her!

‘1912’ airs on the CW on March 15th, 2012. Check out the preview video below and the picture of Sage with Damon above and let us know in the comments below what you think!  Are you enjoying the show?  Waiting sure sucks!