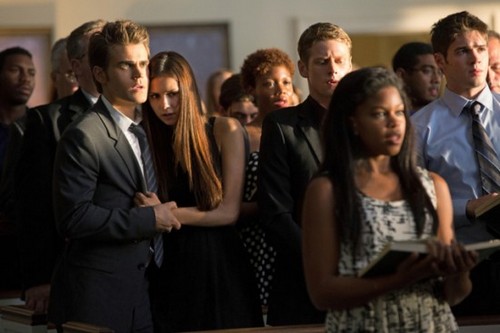 Tonight on the CW my favorite show The Vampire Diaries airs with a whole new episode called “Memorial.” On tonight’s show Elena tries to cope with the extreme highs and lows that are part of becoming a vampire, and Stefan and Damon fight about what is best for her.  Did you see last week’s premiere episode?  We did and we recapped it here for you.

On last week’s premiere episode Elena awakened on the morning after the accident to find the thing she dreaded most had come true – she died with vampire blood in her system and now she had to go through the terrible transition to become a vampire…or face certain death. Stefan promises Elena that he and Bonnie will exhaust every possible way out of the situation, but Damon was furious with his brother for letting Elena die in the first place.

On tonight’s show Elena tries to cope with being a vampire and all the extreme highs and lows that are part of it,  and Stefan (Paul Wesley) and Damon (Ian Somerhalder) almost come to blows while arguing about what is best for her. Damon decides to help Elena in his own way and asks her not to tell Stefan. A stranger, Connor Jordan, arrives in town and begins questioning Sheriff Forbes and Mayor Lockwood. Connor’s actions quickly convince Stefan that they are dealing with a dangerous vampire hunter.

Jeremy (Steven R. McQueen) and Matt (Zach Roerig) are surprised to see a girl they used to know, April, (guest star Grace Phipps, “The Nine Lives of Chloe King”), has returned to town and is enrolling at Mystic Falls High. At a town gathering, Elena comes close to losing control until Caroline steps in to help her. Finally, Damon confides his feelings to an unexpected friend.

The Vampire Diaries Season 4 episode 2 ‘Memorial’ airs at 8PM tonight on the CW and we will be live blogging it will all the up-to-the-minutes. So come back to this spot and spend the evening with us enjoying the show! Make sure to refresh often to get the most current update!

Tonight’s Recap: Tonight’s show opens with Elena in bed with Stephen.  Then we see Stephen talking to Damon.  Stephen wants to get Elena use to feeding on animal blood right away.  Stephen does not think that Elena could handle killing someone.  Damon disagrees with Stephen, he thinks that Elena won’t be able to control the blood lust unless she learns to turn it on and turns.

Stephen and Elena are in the woods and she has fed off a deer.  Stephen assures Elena that the deer will live because he is big.

Back to Damon and he tells Elena he disagrees with her eating animals, vampires eat people, it is part of the natural food pyramid.  He tells Elena she will be miserable.

Connor Jordan a new character comes to the ranch where the pastor blew everyone up and he finds a letter he reads it and leaves.

At Mystic Grill Liz comes up Damon and shows her the paper with the story that the Pastor Young and the Town council was blown up.  Liz thinks Damon did it but Damon tells her he would not have done it that way he would have had a dinner party.

Mr. Connor Jordan, the man who was at the farm comes in and wants to talk to Liz about the farm and the explosion.

Matt tells Jeremy he would like to pay forward what Elena did for him.  April comes over to see Jeremy, April, was a girl Elena use to babysit.  April’s father was Pastor Young who was the one who opened the gas line and killed everyone.  Jeremy gives his condolences but April tells hims she is not one for grief.

Stephen brings Elena a bottle of champagne from the year she was born and wants to celebrate her first feed.  Elena does not feel she has much to celebrate she vomited all the blood up.  Damon calls and he wants to see Stephen.

Elena tells Damon something is wrong, she cannot keep the animal blood down.  Damon tells her she needs to feed on human blood.  Elena wants to keep trying the animal blood.  Damon takes her in the back and cuts his wrist and tells Elena to drink his blood, you can tells Damon is really getting off on it.

Caroline and Tyler are in bed making out and Caroline thinks it is wrong because a lot of people died and they are having sex.  They profess their love for each other.  Of course, the doorbell rings.  It is Conor Jordan and he  has stopped by to see Carol about the explosion at the farm.

He asks Carol if he can come in and Carol tells him no.  Connor is suspicious he does not believe the fire was an accident.  He pushes his way in, Tyler comes downstairs and he asks the man if he can help him. Tyler introduces himself and the man shakes his hand and starts to squash it and Tyler falls to the ground.  The man takes out a gun and shoots.  Caroline hears and comes downstairs, Tyler gets up and jumps out the window as his mother Carole yells.

Tyler is at Stephen and he is pulling the bullets out of Tyler.  The bullets have been hand carved and they have etching.  Whoever Connor is he knows how to kill vampires.

Elena is back at school and Matt wants to know how she feels.  She tells Matt all her senses are heightened. Elena recognizes April young and goes over to her.  They have not seen each other since Elena’s parents funeral.  They want April to speak but she is not sure what she wants to do, Elena gives her advice and tries to comfort her.  As Elena touches April’s wrist she starts to lust after her.  She runs to the bathroom and throws up blood.  The blood keeps coming out of her mouth.  Her dress is ruined.

Stephen comes to visit Bonnie, Bonnie reluctantly answers the door.  Bonnie lets Stephen in, Bonnie tells Stephen she feels like she lost her grandmother all over again.  Bonnie is a mess but she wants to know what Stephen wants.  Stephen shows her the bullets he took from Tyler.  Bonnie does not recognize them.  Stephen tells her he thinks there is a new vampire hunter in town.  Bonnie says, “Bad Timing!”

Meanwhile Elena is trying to clean up the bathroom and Connor comes to the door.  Elena won’t let him in.  Damon shows up knocks on the door and gives her a new dress.  Connor comes over and introduces himself to Damon and wants to shake hands.  Damon refuses he tells Connor he is has a germ phobia.

Connor comes over to see April and he grabs her she falls and blood starts to pour from her mouth.

Damon takes Elena aside he brought her a blood pack.  She cannot drink it, she starts to barf blood everywhere.  Damon tells her she has to drink from the vein.  Elena refuses to do it.

Elena leaves and goes back in church.  Stefan sees Damon and asks what is in the bag.  Stefan accuses Damon of trying to get his way.   Damon tells Stefan that Elena has been lying and she cannot keep any blood down.

Elena sits next to Matt in church and Jeremy tells Elena April was looking for her.  Meanwhile we see April tied up and Connor has her and he has a gun he is loading with bullets.  Carol gets up and calls for April but she does not come.  Carol asks if anyone wants to share a memory and Elena gets up.  Meanwhile Connor has the sight of his gun on people in the crowd.  Elena starts to talk and blood starts dripping.  Caroline smells the blood and Damon tells them not to turn around it is a trap.

Stefan goes to get Elena and brings her back to the pew but she is losing it she really needs to feed.  Damon threatens to get up and find the person who is trying to trap them but Stefan tells him he will expose everyone.

Elena is getting worse and Matt tells them to let her feed on him.  He takes her from Stefan and she bites Matt and takes a little blood and thanks him.  Meanwhile Connor had them all in his gun sight.

Tyler realizes something has to be done, he gets up and goes to the pulpit and starts to talk about his memories of Pastor Young.  Connor shoots him and the whole congregation screams and goes into mass panic.

Caroline gets up and goes over to see Tyler.  Carol tells them they have to call and ambulance because everyone saw Tyler get shot.  Elena finds April and she is bleeding and she goes to feed on her and Caroline pulls her off just in time.  Caroline feeds April her blood to save her and convinces Elena to give April a new memory to replace the ones she has.  Elena tells April she will help her.

Meanwhile Damon goes after Connor and rips the door of his truck off and starts beating the crap out of him but Connor fights back, shoot Damon.  He finally overpowers Damon, jumps back in the car and gets away.

Connor reads the letter he found at the Young farm.  It was a letter to April from her dad Pastor Young and he apologizes for killing the people.  He tells her, his life is one of many that will be lost.

Stephen tells Elena he is mad at her because she lied to him.  He is mad because Elena went to Damon and she fed on Damon.  Elena claims she did not want to hurt him. Elena tells Stefan she is tired of crying that is all she does.  Stefan tells her to come with him.

Meanwhile Damon is at the graveyard drinking.  He is talking to Alaric’s gravestone, he misses Alaric,  and he is telling the him that the gang is delusional.  Alaric’s ghost watches.  Damon says, “I did not get the girl and he is stuck there fighting his brother and taking care of the kids.”  Alaric’s ghost says, “I miss you too buddy!”