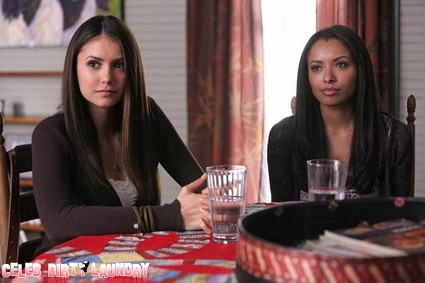 Tonight’s was 11th episode of the Vampire Diaries and it was a great episode.   A preview for The Vampire Diaries episode 12 has been released and it is called ‘ The Ties That Bind.’  We have a sneak peek of the episode and several pics from the episode for your enjoyment.  Tonight’s episode was all about Stefan’s defiance of Klaus and Klaus trying to retaliate and make Stefan do what he wanted.

Stefan has convinced himself he has nothing left in his life except destroying Klaus.  He feels he lost Elena when he went town with Klaus and he does not care what Elena thinks anymore.  Damon is concerned how far Stefan will go to destroy Klaus.  You can read our official recap of tonight’s episode here.

The Ties That Bind Episode synopsis:  PERSIA WHITE GUEST STARS AS BONNIE’S MOTHER – Bonnie believes her recurring dreams about Klaus’ coffins will tell her how he can be killed. The dreams also lead Bonnie to a reunion with her mother, Abby, whom Bonnie hasn’t seen for 15 years. At Abby’s remote farmhouse, Bonnie and Elena meet Jamie, the young man Abby took in years earlier. Bonnie’s sudden appearance catches Abby off-guard, but she does her best to explain the past. Tyler turns to an unexpected ally in his quest to regain his free will. Damon is intrigued by Alaric’s new friend, Dr. Fell, and Klaus continues his bitter negotiations with Stefan over control of the coffins containing his family members.

In the preview for this week’s episode Bonnie figures out who can open the coffins, her mother.   Caroline’s father has Tyler tied up in a cave and and is beating the crap out of him for putting his daughter in danger.  Klaus threatens to tear Damon’s heart out – yikes!  At the end of the promo a new character Jamie shoots Stefan.  It looks exciting, I cannot wait!

The episode airs on the CW on January 17th, 2011.  Check out the preview video & the pictures below and let us know in the comments below what you think!