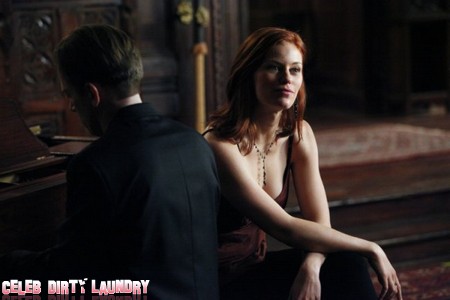 Tonight’s episode of The Vampire Diaries called ‘1912’ was in present time and included fashbacks to 1912.  It gave us a chance to get background information on the Gilberts and the Salvatore brothers.  We also got to meet a new character Sage.    A preview for The Vampire Diaries episode 17 has been released and it is called ‘Break on Through.’    We have a sneak peek of the episode, some spoilers and pictures from the episode for your enjoyment.

On tonight’s show we met two new characters firstly Samantha Gilbert  who was one of the town’s founding family members who interacts with both Salvatore brothers.  In present time Matt gives Elena Samantha’s journals and she learns shocking news.   Secondly we met Sage who is connected not only to Damon and Stefan but to The Originals.  If you missed the episode you can read our full recap here!

In the next episode ‘Break on Through’ a century after their first encounter, Damon and Sage meet again at the ceremony to kick-off the restoration of Wickery Bridge.  Damon is surprised to learn the reason Sage has returned, and pleased when she devises an unusual method to help him figure out what Rebekah is up to.  Abby is having a hard time adjusting to her new reality, despite Bonnie and Caroline’s efforts to help.  When Damon informs Elena of Stefan’s latest struggles, she reaches out to Stefan to help her save a friend in danger, in hopes that it will help bring Stefan even closer to his humanity.  Finally, when Damon discovers a new secret weapon, he lets Stefan in on the news.

In the preview video we see Rebekah come in and Sage and Damon are there and Rebekah asks what happened to the party.  Damon replies: ‘You know what they say 2 is company and 3 is a party.’  Then we flash to a screen and we see Elena saying something has happened to Alaric and is going through a MRI machine.  Then we see Alaric running after someone and that person is screaming: ‘This isn’t you Alaric.’  Yikes it looks exciting!

‘’Break on Through’ airs on the CW on March 22th, 2012. Check out the preview video below and the pictures below and let us know in the comments below what you think!