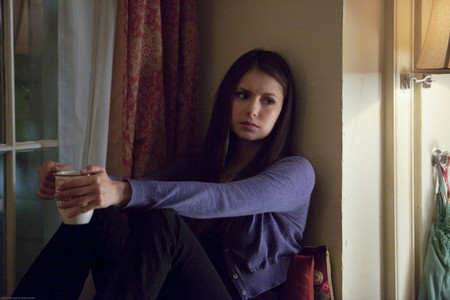 Tonight’s episode of The Vampire Diaries was called ‘Before Sunset.’  On tonight’s show Alaric takes Caroline and Elena prisoner.  He wanted Elena to kill Caroline, but Elena refuses.  Stefan, Damon and Bonnie convince Klaus to work with them to destroy Alaric.  Meanwhile Bonnie contacts her mother Abby and finds a spell that will stop Alaric.  Elena soon finds out that Esther tied her life to Alaric – so he is forced to keep her alive.  If you missed the episode you can read our full and detailed recap here.

On next week’s show and the final determined to protect his sister, Jeremy makes a decision that will change everything. In the harsh reality of the present situation, Elena longs for simpler times when her parents, Grayson and Miranda, and Aunt Jenna were still alive and her biggest concern was her relationship with Matt.

Stefan and Damon leave Mystic Falls together on a mission, but soon split up when Elena needs one of them. Caroline and Tyler are forced to make a life-changing decision. Finally, Bonnie makes a secret deal that has heartbreaking consequences.

The promo for next week’s episode opens with Alaric going to see Jeremy and telling him they need to talk.  Stefan promises Elena that he will make sure they all come back so I  guess they are leaving town.  Alaric grabs Damon and demands he tells him where Klaus is.  The last scene Matt and Elena are driving the car and Rebekah appears in front of the road, they swerve to miss her and the car goes over the bridge yikes!  The promo says the finale will grip us to the final end.  I cannot wait.

‘The Departed’ airs on the CW on May 10th, 2012.   Check out the preview video and the pictures below below and let us know in the comments below what you think!