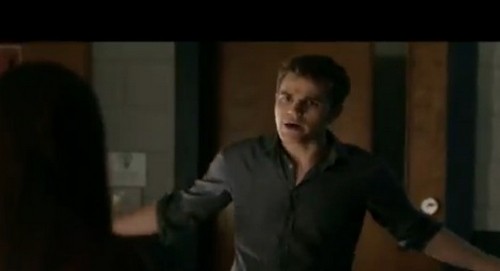 Tonight was the mid-season finale of THE VAMPIRE DIARIES and what a fabulous episode.  Tonight was a virtual bloodbath Klaus killed everyone that Tyler cares about.  I cannot wait for the next episode but sadly we will have to wait until January.  But, good news we have some juicy spoilers of Season4, Episode 10 “After School Special” for you!

On tonight’s show it was a Winter Wonderland-themed party.  Stefan and Caroline find themselves at odds with Tyler over his plans for Klaus and his hybrids.  Tyler wanted to kill Klaus, but Stefan wanted him to wait because Klaus had a sword that was vital in their search for a cure for Elena.  Tyler told Caroline he found a witch that will put Klaus body in his and then they would cement him.  That would give the hybrids time to get away.

Caroline came up with a better solution, to use Rebekkah’s body but Hayley was not pleased by that idea.  Later, Klaus makes a discovery that leads to chaos and violence and a lot of deaths.  So much more happened if you missed the episode you can read a full and detailed recap here!

Spoiler alert: If you’re one of those people who doesn’t like spoilers, stop reading now! We have some juicy spoilers for you about the season 4 episode 10 of CW’s “The Vampires Diary.”

According to TV Guide, “The first episode back will mirror The Breakfast Club with several characters stuck in the school library, ultimately revealing things about each other they were hoping to hide. But think more sad and dark, rather than cheery dancing in the halls, as a few of the scenes will force certain truths to come out from both Stefan and Elena that might forever change their relationship.”

April found Rebekkah at the end of tonight’s episode and Rebekkah had a white oak stake in her.  It may be that April removes the stake and Rebekkah is alive again. Or, was it Klaus – now that his hybrids are dead he needs help.

The originals are back in January!   Rebekkah calls Tyler, perhaps she can keep Klaus from killing Tyler.  Tyler is going to be totally pissed at Klaus when he finds out he killed his mother.

Klaus is still determined to have the mark/tattoo on Jeremy’s arm grow.  It also looks like Stefan and Damon are fighting against him.

Even though Damon has un-sired himself to Elena it looks like all is not good with Stefan and Elena yet.  He asks her,“How many more ways can you rip my heart out?”

Damon is working with Jeremy and training him.  But Jeremy has decided he is not going to do things they way Klaus wants him too.  Klaus is not going to be happy about that!

In Bonnie news apparently her father Rudy Hopkins who is the ex-husband of Abby Bennett Wilson will be coming back in a recurring role.  He doesn’t get involved or care to know anything about witchcraft.  We will see him first in Episode 10.

The Vampire Diaries Season 4, Episode 10 “After School Special” airs on the CW on January 17th, 2013. Check out the preview video  from episode 10 and let us know in the comments below what you think!