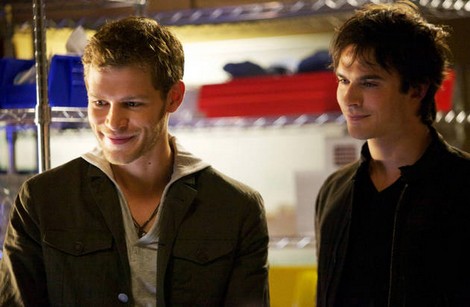 WOWSER!  What an episode tonight on The Vampire Diaries.  The show picked right up where it left off last week with Elena trying to deal with all her senses heightened now that she is a vampire.   Her blood lust is almost going out of control.  We also met a new character, vampire hunter, Connor Jordan.  He is certainly going to cause the gang a lot of problems.  I cannot wait for next week’s episode!  We have gotten our hands on a  sneak peek video and some spoilers to wet your appetite for next week’s episode 3 titled “The Rager.”

On tonight’s show Elena was having problems coping with being a vampire.  Stefan wanted her to feed on animals and Damon thought it was a bad decision.  It seems Damon was right, Elena kept rejecting every blood except human blood from a vein.  She spent a lot of the episode vomiting.  We met a new vampire hunter, Connor Jordan, he is dangerous and he is out to rid Mystic Falls of the vampire population.  We met a second new character tonight, April, Pastor Young’s daughter.  She use to live in Mystic Falls but she moved away, now she is back to finish high-school.  Did you watch  tonight’s episode?  We did and we recapped it here for you!

Spoiler alert: If you’re one of those people who doesn’t like spoilers, stop reading now! We have some juicy spoilers for you about the season 4 episode 3 of CW’s “The Vampires Diary.”

Official CW synopsis of next week’s episode:  Connor continues his search to uncover the secrets of Mystic Falls and tries to convince Jeremy to work with him.  With Dr. Fell’s help, Damon and Klaus question Connor, but the confrontation takes a lethal turn.  Trying to keep her new life as normal as possible, Elena is determined to continue her senior year at Mystic Falls High with support from Matt and Caroline.  Rebekah’s  arrival at school makes it difficult for Elena to control her anger, but she learns that confronting Rebekah can be extremely dangerous.  Later, Rebekah realizes how alone she is, and reaches out to April.  Stefan takes Elena on a thrilling motorcycle ride in an effort to show her that life can still be fun.  Tyler  gets a surprise visit from Hayley, a werewolf who helped him through the ordeal of breaking his sire-bond to Klaus.  Concerned about Elena, as well as his own emotions, Stefan turns to a sympathetic Caroline for advice.

On next week’s show Connor confronts Matt and rips the bandage off his neck.  Remember on tonight’s episode 2, Elena had to feed off Matt in the church to prevent losing control.  Connor slams Matt up against the wall and asks him which one of his friends is a blood sucker.  Next week Klaus, Damon and Dr. Fell are going to join up to try and defeat Connor.

Meanwhile, next week Elena sees Connor and tells Stefan that he is the hunter.  Across the preview video the message, “The New Evil Is Here!” flashes.  So Connor is the new evil!   We see Connor sitting outside a trailer creating a new weapon.  Yikes, he is going to be trouble.

Damon is not pleased about Connor and tells Stefan, “I am going to find him, and I am going to eat him!”  Ya gotta love Damon!  Something goes down with Damon and Connor and we see Connor point a rifle at Damon and Damon jump for cover. 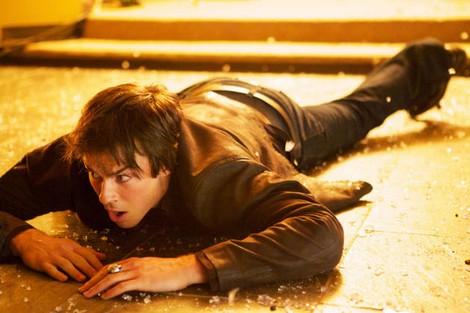 Rebekkah is back next week and she tries to BFF April since no one else in school seems to want too.  Rebekkah also has a confrontation with Elena and Elena learns the hard way not to mess with Rebekkah.  Elena has to remember Rebekkah is an original and a lot stronger than baby Elena.

The Vampire Diaries Season 4, Episode 3 “The Rager” airs on the CW on October 25th, 2012.   Check out the preview video from episode 4 and let us know in the comments below what you think!