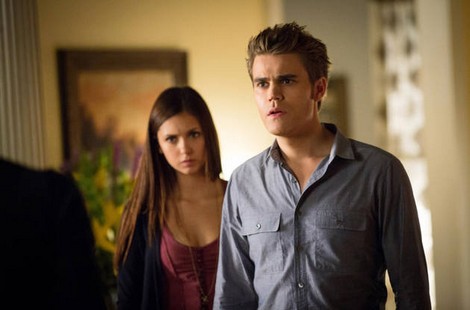 Tonight on the CW my favorite show THE VAMPIRE DIARIES airs with a whole new episode called “The Killer.” On tonight’s show Stefan and Klaus form an uneasy alliance to try and contain the danger that Connor has unleashed on the town. Did you see last week’s premiere episode? We did and we recapped it here for you.

On last week’s episode Damon went with Elena and Bonnie  to visit Whitmore College, where Professor Shane was taking over the Occult Studies classes formerly taught by Bonnie’s grandmother.  At a fraternity costume party, Damon took advantage of the wild scene to give Elena a lesson in choosing a victim. Rebekah’s attempt to buy Matt’s forgiveness fell flat, but she was intrigued by unexpected news from Klaus. When Stefan questioned Klaus about Connor’s  motives, Klaus revealed a long-ago encounter with a powerful group of vampire hunters, but it’s Rebekah who delivered the information that stunned Stefan.

On tonight’s show THE HUNTER’S MARK — Stefan and Klaus form an uneasy alliance to try and contain the danger that Connor (guest star Todd Williams) has unleashed on the town. When Connor takes Jeremy, Matt and April (guest star Grace Phipps) hostage at the Grill, Stefan and Damon have a serious disagreement about the best course of action, and Elena is again caught between the two brothers. The situation quickly turns violent when Klaus sends one of his hybrids, Dean (guest star Blake Hood, “The Young and the Restless”) to stand up to Connor.

Caroline is surprised to find Hayley (guest star Phoebe Tonkin) at the Lockwood mansion. Meanwhile, Professor Shane (guest star David Alpay) works with Bonnie to help her get past her fear and guilt. Chris Grismer directed the episode written by Michael Narducci.

The Vampire Diaries Season 4 episode 5 ‘The Killer’ airs at 8PM tonight on the CW and we will be live blogging it will all the up-to-the-minutes. So come back to this spot and spend the evening with us enjoying the show! Make sure to refresh often to get the most current update!

The Hunter, Connor, is inside an RV.  He is remembering being chained up by Klaus, the vampire werewolf hybrid.  As he remembers he is removing poison from a severed head’s mouth.  He says no one will get in his way.

Now we are at the Mystic Grill.  Jeremy is cleaning up and he hears a noise.  He turns around and Connor comes up behind up and puts his hands around his neck and tells him to tell him everything he knows about vampires.

Elena is “writing” in her diary.  She is admitting that she is a vampire and she hates it.  At the same time Stefan is writing in his diary admitting that he hardly recognizes her and that he wants to find a cure for her vampire affliction and make Elena human again.  He agrees to do whatever Klaus asks of him.

Klaus and Stefan are talking to each other on the phone.  Klaus is letting him know that Connor has escaped and with the severed hybrids head no less.

Back at the grill again, Matt and April are talking. She is asking Matt where Rebekah is and that she promised to help her.  Matt doesn’t understand why she’s asking him since they are not a couple.  Then Connor comes around the corner with a knife at Jeremy’s throat.

Damon walks into Elena’s house and he’s trying to find out where Stefan is at.  He assumed that Elena called him to tell him how she drank blood and danced with him the previous night.

At the grill, Connor is trying to get information out of the trio, but none of them know anything.  Jeremy wonders if he was compelled.  To motivate them to remember he sends a text to Damon, Stefan and Elena to come to their rescue.

Stefan walks into Elena’s house and they hug.  She’s grateful he’s okay.  They are discussing the text.  They realize he may have werewolf venom and they are gearing up to fight.  They just need Bonnie the witch, but she no longer does magic.

Bonnie is reading a book and is being compelled to be hypnotized.  She doesn’t want to do it.  She believes it will have no effect on her.

Elena sees Stefan outside her window talking on the phone.  She is wondering to whom.  Meanwhile, Damon is gearing up for World War III with dynamite and all.  Stefan calls them and tells them who the hostages are. Elena wants to go help, but Damon is forbidding it.  He pretends he’s got her caught and is going to kill her.  She reverses it on him and shows him the right way to kill a vamp.

The hostages are trying to figure out what Connor is doing.  He’s mixing fluids, turns out it’s a bomb.  Jeremy wants to know what conversation he had with him, because he has no recollection of it happening.  Connor is letting them know that every entrance/exit is rigged.

Stefan and Damon are discussing the tunnel map.  Damon is upset that they are having to share intel with Klaus.  He wants to know why.  He is wondering if Klaus compelled him Stefan.  Damon tries to go on his own, but Stefan “paralyzes” him.

Elena wants to go with Stefan to help save her brother, especially since Damon is out cold.  Stefan tells her no.

Dean and Tyler are arguing over who is going to listen to Klaus.  Tyler doesn’t want to help, but Dean is telling him he has no option.  Caroline tells Tyler to ignore him.  Tyler calls Klaus and tells him he can do whatever he wants and he doesn’t have to do anything he says.  Klaus reminds him of a previous female in his life and that he’s sure he doesn’t want him to mention it.  Tyler hangs up and tells Dean he can do whatever he wants.

Stefan speaks to Connor over the phone and asks him if he’s curious to know why Klaus did not kill him.  Connor hangs up.  April is telling Matt that there is something familiar about Connor, but she can’t figure out what.  Matt just wants to focus on escaping.

Dean is doing recon on the grill to see what angle they can best get in.  Connor is still making bombs.  He is telling Jeremy that he killed his own friend and has a tattoo for the occasion.  They hear someone come in.  Dean walks in, but skips over the wire.  He steps on a pressure plate and sets off a backup bomb.  He’s covered in glass and debris.  He tries to get up and Connor shoots him.  Killing him.  Stefan shows up to help the hostages just in time.

Stefan is showing the hostages the tunnel map on his cell phone trying to help them get out.  Connor starts shooting.  Jeremy is trying to get away when he realizes that he is standing on a pressure plate that could go off at any second.

Damon is finally waking up and he notices his ring is gone.  Elena insists on going and Damon finally agrees to let her go, but to be safe about it.  Connor does not know that she is a vampire.

Elena walks in and Connor tells Stefan that he will shoot the boy if he doesn’t come forward.  Stefan counts to 3 and Stefan stands up just when Elena charges Connor.  She starts to attack him and Jeremy accidentally gets shot in the process.  Stefan rushes to get him off the plate and the bomb goes off distracting Elena.  Connor gets the better of her, but somehow he ends up missing in a matter of seconds.

Elena makes Jeremy drink from her wrist to help him with his injuries.  She wants to know why Connor came after Jeremy.  He tells her because they are alike.  No one can see Connor’s hunter’s mark but Jeremy.

Stefan is taking Connor through the tunnels and Damon stops him.  Stefan tells Connor to run as fast as he can and tells Damon that they are not going to kill him.  Damon’s not scared of Klaus and he still wants to know what he has over Stefan.  Stefan admits that Klaus has a cure for vampirism.  That stops Damon in his tracks.

Elena ends up catching up with Connor.  He tries to kill her after she tells him to stay away from her brother.  He tells her that she’s the biggest monster he’ll ever meet.  She then breaks his neck and he’s dead.

Bonnie is sitting with Professor Shane.  They look like they are meditating, but they are working on hypnosis.  She doesn’t believe she can do it, but he tells her they’ve been doing it for over 7 hours.  He is trying to talk her into doing magic again even though she is scared of the spirits.  She just has to say one little thing and she can light a candle.  “I don’t have to be afraid.”  She ends up lighting all of the candles.

Elena is trying to bury Connor and Stefan and Damon find her.  She overheard them talking and she is mad that Stefan made a deal with Klaus.  She’s also mad with Damon for telling her to kill Connor which she did.  The realization that she killed her overtakes her and she cries.  They guys can only watch.

Tyler and Hailey are hugging when Caroline walks in.  She’s mad that she caught them, but Tyler tells her that he doesn’t think of Hailey that way.

Jeremy, Matt, and April are discussing their day wondering why there was a gas leak.  Apparently what they were forced to think.  A bracelet falls and Jeremy puts it on April’s wrist.  Matt tells her she should wear it.  Jeremy’s about to walk away when he sees a tattoo appear on his hand.

Stefan and Damon are talking about a possible vampire cure.  Damon wants to know why Stefan wants to cure Elena.  He says she’s not supposed to be that way.  Damon says he’s fine with her either way, but if Stefan needs her to be cured then he will help him.  He will do it for Stefan.

Elena is cleaning all of the blood from her body.  She believes killing someone is the worst thing in the world.  That she has lost herself.  Blood starts trickling on her diary.  She starts to see blood everywhere.  She follows it and it is all over her bathroom with the words “Killer” on her mirror.  She slips on a puddle and when she looks up the blood is gone!!