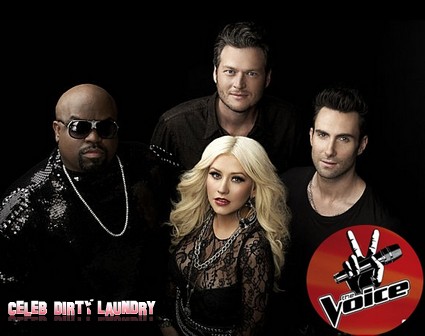 On tonight’s episode of The Voice the coaches Cee Lo Green, Blake Shelton, Christina Aguilera and Adam Levine continue to build their teams with the Blind Auditions Part 4.  If you missed the first 3 audition shows you can read our official recaps here.

Do you have any favorites yet, anyone you are rooting for?  Do you think the judges made any mistakes yet? Have we met the winner of this season of The Voice yet? Sound off in the comments below, or on TWITTER or on FACEBOOK!

Meanwhile last week Simon Cowell hinted at something super big involving American Idol, X Factor USA and The Voice. What does he have in mind? Here’s a tweet from the man himself explaining what he might be cooking up ‘Maybe the winner of @TheXFactorUSA this yr should compete with winner of The Voice & Idol in a super final. Just a thought. I’d be up for it.’  What do you think, would you like to see that happen?

RECAP: Tonight we are back with four awesome judges that are ready to find more great talent.

The first contestant, Ducky, 26, is a painter and an aspiring singer. He is with his girlfriend, who he wants to get married to and if he can get on The Voice, he thinks his dream will come true. He sings “Tighten Up”. The judges can’t make up their minds on who should push the button, which is a big mistake on their part.

Next is Jonathas, 23, he is a father of two and has brought his children and his wife with him. A native of Brazil, he is looking for the American Dream! He sings “U Got It Bad”. The first judge to turn is Cee Lo. Christina is next. Jonathas does little dance for Christina and she loves it! Jonathas chooses Christina to coach him, Cee Lo loses this one.

Monique, 23, is the next hopeful and she is with her parents. She is at The Voice as a thank you to her parents for all they have done to her. She come to the stage to sing “Mr. Know It All”. She has a nice voice, good harmony and the first person to push the button is Christina, who is really exicted to work with Monique’s raw talent that can be honed into something amazing.

Carson goes out in the street to meet a musician, Naia Kete, that he will personally invite to the blind auditions. She comes to the audtion wth her mother and sings “The Lazy Song”. Blake is the first one to turn his chair, Cee Lo turns next. Naia picks the first one that picked her, Blake Shelton.

Eric is next and brings his parents with him. She sings “Free Fallen” and gets the audience partcipation with clapping to the tune. Eric has a distinct voice, but not enough to have any of the judges turn their chairs. After the usual, “don’t give up”, they move on to the next hopeful.

Charlotte is next and she decides to sing “Apologize”. She’s very quiet, but catches Adam’s attention and he turns his chair. Blake is next, followed by Christina and Cee Lo. All Four turn around, Charlotte has a lot to think about here. The judges battle to be the one to coach, Charlotte picks Blake Shelton! Blake has a good laugh at the other judges, he is enjoying this win.

Tony is giving up a career with Green Day to have his chance to audition on The Voice. His wife is with him for support and she is pregnant. He sings “We Are The Champions” and Cee Lo turns first. Cee Lo is shocked that nobody else turned their chairs and that he is lucky enough to get to coach him.

Anthony, 33, a pastors son is next. His father is none other than, Tony Evans and a very popular Christian pastor. Both his parents are with him for support. He sings “What’s Going On” and Christina is impressed enough to be the first one to push her button, she really loves his voice and is the only one to turn around.

Jamie works in a sandwich shop in Chicago and is surprised by his manager with an invitation to The Voice Auditions. He has had it rough, half of one of his lungs was removed due to a medical condition. He sings “Folsom Prison Blues” and Adam turns right away, I would have too. Cee Lo is next, but Adam gets chosen as his coach.

Dylan, 19, the son of a vocal coach, is there with his mother for support. He sings ”Valerie”. Nobody turns for him, which is a complete shock because of his mother’s coaching. No worries, he gets the “don’t give up” pep talk as well.

Justin is up next, from the Carson Daly Band. He is with his wife and little girl. He sings “Babylon”. The first and only one to turn around is Cee Lo. Justin is happy, if had a choice it would have been Cee Lo anyway and feels blessed.

Nicolle is a country girl, she is 27 and is at the auditions with her little brother and her mother. She plays a piano and sings “You Save Me”. Adam is the first one to turn and the only one, the others miss out. t

Eric is tall and soulful, he is ready to show his stuff. He comes to the stage and sings “You Make My Dreams”. Nobody turns around, Eric is going home with his dad.

Mathai, 16, is the last person to sing, she sings “Rumour Has It”. Adam turns, Blake is next, then Cee and she gets a standing ovation from Adam! She chooses Adam and Blake is not happy about it.

That’s it for tonight, who was your favorite?