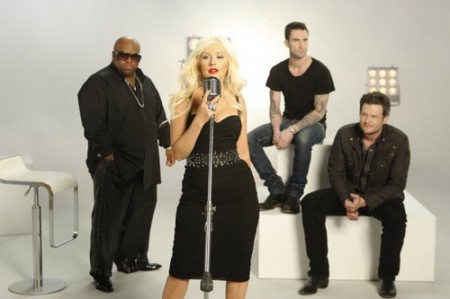 Tonight The Voice returns with the first of the Live Performances of Season 2.  Last week was the last week of the Battle Round and if you missed any of the Battle Rounds you can read full recaps here!  With the field narrowed to 24, the artists sing for their lives as America votes for who should move on.

Only the strongest members of each coach’s roster remain and are now proceeding to the live stage shows. In this final performance phase of the competition, the top contestants from each team will compete against each other during a live broadcast. The television audience will vote to save one talent on each team, leaving the coach to decide live who they want to save and who will not move on. At last, each coach will have his/her best contestant left standing to compete in the finale. From these four, one will be named “The Voice” — and will receive the grand prize of a recording contract and $100,000.

If you want to vote for your favorite – there’s a toll-free phone number, a texting method, downloading an artist’s single counts as a vote, you can also vote online at nbc.com, and there’s a Facebook app.  Check out the video from The Voice’s social media correspondent, Christina Milian who tells you how to vote!

Tonight’s Recap:  Tonight Live Rounds of competition begin – Christina and Blake are going to be showing off their talents and that is lots of talent to show off!  Christina’s team is going to be challenging Blake’s team. Adam and Cee Lo will have their head-to-head competition next week.

Jermaine Paul is up first for Blake’s team and he is singing Bon Jovi’s “Livin On A Prayer”.  The crowd is hysterical and He does a great job – Christina’s says he made the song his own and Blake says he was great.

Chris Mann takes the stage from Christina’s team – he has operatic training – he will be singing “Bridge Over Troubled Water” by Paul Simon.  He says he is singing for his momma – how sweet.

Christina stands up to applaud for him.  Cee Lo says it was a great performance.  Adam tells him it was great.  Christina tells him that it was totally beautiful.  What will America say??

Blake’s team member up next with RaeLynn and she is singing“Wake Up Call” by Maroon 5 and doing it country style – which in my mind means NO style!

RaeLynn pretty much sucked but Christina says she liked it… Adam tells her that she broke his heart because she did the song so beautifully.  Blake says that RaeLynn is representing the new country music and says she did well.  The new country better get a better rep.

Christina’s team is up next with Moses Stone singing “Stronger And Power” by Kanye West.

The rapper does it his way.  Cee Lo says he is a natural on stage and did a great job. Adam thinks he has more potential as a singer than a rapper.  Blake says that the work Moses has done with Christina really shows.

Christina tells him that he excites her – his singing that is!

Blake’s Naia Kete is next singing “Turning Tables” by Adele.

She looks beautiful and sounds great and ends strongly. By not going Reggae she shows that she can master various styles. Christina wanted Reggae and said that there were segments that were weak.  Blake on the other hand thought it was amazing.  But the voters have the final say…

Christina Team  Singer – Lindsey Pavao – Song: “Somebody That I Used to Know” by Gotye ft Kimbra.  Weird performance…  Adam says what was missing was the kind of power I feel when I hear the chorus .  Christina touts her by asking where she can go to buy her album.

Blake’s Bunch – Singer – Jordis Unga doing  “Alone” by Heart’.   The crowd isn’t excited – nothing great here.  Blake says she took the hardest parts of that song and did them well – she is amazing.  Well we’ll see about that…

Team Christina – Sera Hill singing “Find Your Love” by Drake.  Sera gives us her all despite seeming short of breath – the performance is great but what is with the hot shirtless men?  The topless men might sadly be the most memorable of her performance – in which case she could be in trouble.  Blake says he was expecting Christina to stick dollar bills in the dancers’ pockets – but Christina says she was great – of course.

Team Blake featuring Erin Willet  Singing “Living for the City” by Stevie Wonder.  Good performance but not great.  Besides nobody can do this song better than Stevie.  Cee Lo says you are champion tonight after losing your dad.  Blake calls it the best ‘technically and passionately’ of the night.  Christina is making dissenting noises…

Team Christina with Ashley De La Rosa singing “Right Through You” by Alanis Morissette.  This is really impressive – the raw emotion of the performance without overproduction.  Adam says that he could see the 17 year-old before but tonight ‘you were a woman.’  Yikes!  Christina is also positive saying that Ashley ‘rocked it out up there.’  Adam adds that they just got along and he stands up and shouts ‘Yes!’

Team Blake with Charlotte Sometimes performing “Misery Business” by Paramore.  Adam says that it’s hard to have a unique voice which is his nice way saying there were problems with the song.  Blake is supportive and calls her a true artist with vision.

Christina’s Club with Jesse Campbell doing “What A Wonderful World” by Louis Armstrong.  It is a brave person to try this number!  Louis Armstrong put his stamp on this and nobody should really go near it.  That’s my opinion anyway.  Cee Lo says that his voice is ‘almost’ as beautiful as his hair.  Jesse is good – no doubt.  Adam warns his team saying ‘here is the guy you have to beat.’  Christina makes some remarks about the other coaches not being sober!  She knows she has a powerhouse singer is Jesse.  She can afford to be cocky.

Come and check out all of DWTS live recap coverage along with all of the contestants dance videos here.