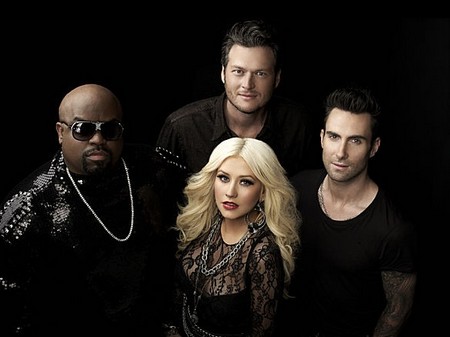 Last night The Voice treated us to the ‘Quarterfinals’ of Season 2.  This week pitted four of  Team Adam Levine’s singers against four of Team CeeLo Green’s singers.  Did you watch the show?  We did and we recapped it here for you!

On last night’s episode of The Voice both coaches were obligated to immediately eliminate one of their team numbers.  On Team CeeLo, James Massone was sent home and on Team Adam, Pip was sent home.

On tonight’s episode one The Voice a member of Cee Lo’s and Adam’s teams will be eliminated.  Left on Team CeeLo is Cheesa, Jamar Rogers and Juliet Simms. Left on team Blake is Katrina Parker,  Mathai and Tony Lucca.

The competition comes to an end tonight for two more artists. In the forth of six Elimination Shows, the artist who receives the most viewer votes on Teams CeeLo and Team Adam from the previous night’s Quarterfinal Performance Show, will be saved and guaranteed a spot in the Semifinals.

The bottom two artists on both teams must each perform an additional last chance song in a fight for survival. Coaches Adam Levine and CeeLo will then be put on the spot to save one more member of their team to move into the Semifinals, thereby eliminating the other artist.

Florence + the Machine who performs her hit single, “No Light, No Light,” off her latest album, “Ceremonials.” Accompanying her will be the artists from Team CeeLo.

RECAP: To help break up the tension from tonight’s live elimination show, The Voice has a special guest performance from Florence + the Machine to start the show.

Last night on The Voice was in fact the best of the season thus far. If someone from Teams Cee Lo and Adam doesn’t end up winning, I would really be surprised.

Adam reveals that he got hate mail and people tried to kill him for eliminating Pip last night. After America’s votes last night, on Team Adam, the person who received the most amount of votes is – Tony Lucca. This means that Katrina Parker and Mathai each will have one last chance to prove to their coach that they have what it takes to be saved.

Time to find out who is going to be safe on Team Cee Lo, it is Jamar Rogers. Cheesa and Juliet Simms are going back stage to get ready to perform their last chance performance.

Mathai is first and she sings, “Cowboy Casanova” by Carrie Underwood. Mentors Comments: Blake, “It’s hard not to love Mathai, I love that she is embracing her hillbilly side.” Christina, “You are a little more aggression and I am happy you had a chance to do that.” Cee Lo, “I really like what you did to convey that you want to stay.”

Katrina Parker sings, “Perfect” by Pink. Mentors Comments: Blake “The audience kind of speaks for itself, you are the best singer.” Christina, “I hundred percent agree with Blake and you are great at picking songs for yourself”. Cee Lo, “I agree with the other coaches, it was a great song for you and you sang well under pressure.”

Adam is having a real hard time deciding who is going to stay and who is going home, although it appears that Katrina really blew him away, who does he pick to stay.. Katrina.

Cheesa is up first and she sings, “Already Gone” by Kelly Clarkson. Mentors Comments: Blake, “It’s hard to not get excited when you sing, but it sounded a little flat. Christina, “You have done amazing things with your journey on this show, you were a hair under pitch until the end. Adam, “Sometimes I am pitchy too, but last night the Whitney song was unbelievable, but today wasn’t as strong.”

Juliette Sims sings, “Torn” by Natalie Imbruglia. Mentor Comments: Blake, “I think I was the only one that didn’t hit my button for you in the blind auditions, but I love you now, you are not like anybody else.” Christina, “I am a fan of your voice, the softer voice is not my favorite, but I loved when you sang Roxanne.”

It’s all up to Cee Lo, he has to decide who he is taking to the semi-finals, he chooses Juliette Simms.