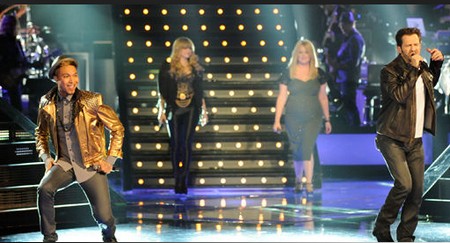 Last night The Voice treated us to the ‘Semi-finals’ of Season 2.  All eight of the remaining contestants of The Voice performed. The stakes have never been higher; after tonight, only four contestants will move on to next week’s finale.  On last night’s show Juliet Simms brought the house down.  If you missed her performance you can see the video of her performance here.  If you missed any of last night’s performances you can see them here.

The final four singers will be unveiled tonight.  The final four will be based on a combination of viewer votes and scores from their own coaches that were collected by an accounting firm and won’t be revealed until the results-show telecast.  One hopeful each from Teams Adam, Blake, Cee Lo, and Christina are guaranteed berths in the finale.

On the show tonight all four finalists from Season 1 of The Voice will be back to perform.  Former Team Adam contestant and Season 1 winner, Javier Colon, will perform his single “A Drop in the Ocean” from his post-Voice album, Come Through For You.

RECAP: This is it, we find out who will represent their coach in the finals. There are no last chance performances, there are no saves. Opening the show tonight is Team Blake Shelton, Season 1 runner-up, Dia Frampton, who performs alongside Kid Cudi.

Each coach has 100 points to allocate between the two semifinalists on their team. The amount of points they award to the contestants will be added to America’s vote for the final score.

Team Christina is up first tonight with Chris Mann and Lindsey Pavao. Christina says she is feeling sick but she is not going to get emotional tonight because they are both winners tonight. After last night’s performance, Christina split up 100 points between the contestants and she gave 50/50. When they add Christina’s score to America’s; Chris Mann 110 and Lindsey Pavo 96, Chris Mann has a higher score and advances to the finals. Lindsey Pavao is eliminated.

Season 1 singer of The Voice,  Javier Colon, performs his single “A Drop in the Ocean” .

Team Blake has Erin Willett and Jermaine Paul. Blake says that he has so much respect, Jermaine took a huge a huge step in following his dreams and Erin has been through a personal hell during this show and continues to stand there with so much strength. Blake split up 100 points between the contestants and he gave them 50/50. When they add Blake’s score to America’s; Erin Willett 77  Jermaine Paul 123, Jermaine Paul has a higher score and advances to the finals. Erin Willett is eliminated.