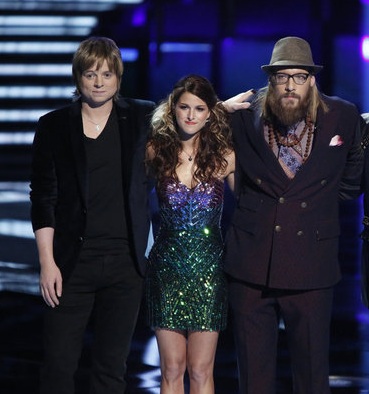 Tonight on NBC is a whole new episode of THE VOICE and the competition is coming to an end. Tonight is the Final Performances episode and the top three artists will perform live in front of coaches Christina Aguilera, Adam Levine, CeeLo Green and Blake Shelton in a final bid for America’s votes. Did you watch last week’s performance show? We did and we recapped it for you here!

During last week’s semi-finals results show Trevin Hunte was given the boot by America.  And then there were three – Terry McDermott, Nicholas David, and Cassadee Pope.   Team Blake has two finalists and Team Cee Lo one.  Mentors Christina Aguilera and Adam Levine are left without any contestants.  One of Blake of Cee Lo’s  singers will walk away as the winner of the 3rd season of The Voice and will receive the grand prize of a recording contract.

On tonight’s show the top three artists give their ultimate performances in a final bid for your votes.  Tonight features the Top 3 singing two songs each as they battle it out for the title.  The contestants have made it through the the blind auditions, the battle rounds, the knock out rounds and the live shows.

Tonight’s “Live Finals Performances” is going to be an exciting one, which you won’t want to miss. So be sure to tune in for our live coverage of NBC’s The Voice – tonight at 8PM EST!  While you wait for our recap, hit the comments and let us know what you have thought of Season 3 of The Voice, so far!

Tonight’s recap: After week’s of intense competition , now only three artists remain, Terry McDermott, Nicholas David and Cassadee Pope who will compete head to head for the very last time. It will be a night of incredible performances and in the end, it will come down to America’s votes.

We start tonight with Nicholas who is here for his family. Cee Lo was the only coach to turn around for him and he bets the rest of the judges are kicking themselves now. Nicholas has chosen to due a medley tonight of Jerry Lee Lewis’ “Great Balls of Fire” and Jimmy Hendricks’ “Fire”.

Coaches Comments:  Adam “I am so happy and this is great, it was cool to see a different side of you, it was so entertaining and fun.” Blake “That was so much fun, I am glad that you went there with it”. Cee Lo “Sometimes we forget that this is supposed to be fun, your humility is always heartwarming but your fire tonight burned it down, I loved it”.

Cassadee Pope is next and she is singing one of Miranda Lambert’s songs, “Over You”.

Coaches Comments: Christina “You look drop dead gorgeous, stunning. Your voice, you nailed that song with so much emotion, you can sing anything and sad you are Blakes”. Adam “The coolest thing about your voice is how you have developed your voice, it is finely tuned and you have so much to be proud of”. Blake “You know how I feel about that song and you singing it, is perfect. America’s heart is heavy and this song is about healing, it was a great moment and somehow it will start the healing process, you truly amaze me”.

We get to see behind the scenes visit of Terry at Blake’s house with his wife and child when Blake surprises him with a visit from his dad that he hasn’t seen in four year. Now for a special performance, Blake and Terry are singing Aerosmith’s “Dude Looks Like A Lady” and Adam does a special performance on guitar.

It’s Nicholas’s defining moment, with “Lean On Me” by Bill Withers.

Coaches Comments: Adam “I like your outfit, you know how much I love you, that version is great, you did justice to  it.” Cee Lo “We have spent a lot of time together and I sit here in awe and appreciate you so much. Very simply, I believe in you, you move me. I have nothing fancy to say, but something true and sincere, I love you man”.

Coaches Comments: Adam “I know I can tell in the beginning there was something going on, but being a great singer, you recovered and that is why you are here. You friggin’ nailed it”. Blake “It is hard what you do up there and you do it week after week, nobody does that like you”.

We get another behind the scenes when Cassadee, her sister, mom and boyfriend all visisted Blake at his house and her mom thinks Blake has given her the confidence to be on the show.  On to the next performance, it’s Cassadee and coach Blake singing Cheryl Crows’ “Steve McQueen”.

Now it’s a softer side of Terry as he sings “I Want To Know What Love Is” by Foreigner.

Coaches Comments: Christina “Your voice is incredible but to be on this show, it takes strong work ethic and it’s really commendable. You sang a lot of songs and you are kicking it”. Blake “To add, it’s interesting that you picked that song as your breakout because you did it with such passion and I think you sang it even better tonight. You absolutely drive me crazy because you blow me away and I am honoured to be associated with you”.

Nicholas and his family spent some time with coach Cee Lo to give him a better understanding of who Nicholas is. Singing “Play That Funky Music” is Cee Lo and Nicholas.

It’s Cassadee, she left her band to go solo and apply to The Voice. The show has helped Cassadee in many ways, even her personal life as she is now reunited with her father. Tonight Cassadee will be singing “Cry” by Faith Hill.

Coaches Comments: Adam “I wanted you on my team and I was really critical, but I don’t care, you have accomplished everything that I wanted you to”. Blake “I don’t know what else I can say, I have never heard you sing as good as you did tonight”.

The artists have done everything to convince you that they should be the winner of The Voice, it’s up to you America. Don’t forget to return to CDL tomorrow night when we recap the results of the winner live.