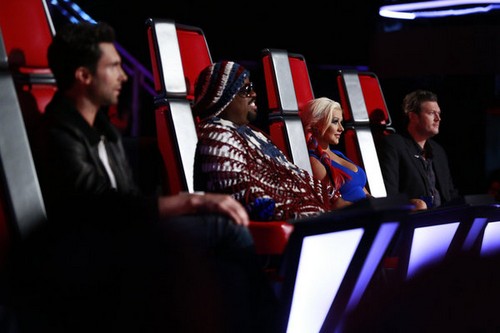 Tonight on NBC is a whole new episode of THE VOICE.  On tonight’s show America’s vote will put through the top two artists from each team and the coaches will each save one leaving them to move on to the next phase of the competition.

On tonight’s show the playoffs heated up, Christina Aguilera and Cee Lo Green‘s contestants took their to sing for America’s vote and a spot in the Top 12.  After tonight’s show who are you hoping make it to the Top 12?  Remember what is important about this season is there is no guarantee that every coach’s team will have a slot in the finals.

On tonight’s show the Top 12 artists will be determined as two artists from each team will be sent home on “The Voice” Live Playoffs Results Show on November 8. In the first elimination show of the season, the two artists who receive the most viewer votes on each team from the previous nights’ Live Playoffs, will be saved and guaranteed a spot in the Monday, November 12 Live Show. Meanwhile, each coach is tasked with the difficult decision of choosing one more artist from the remaining three to move forward in the competition and perform in the next week’s Top 12 Live Show, thereby eliminating the other artists.

Tonight’s Live Play-offs, Results is going to be an exciting one, which you won’t want to miss. So be sure to tune in for our live coverage of NBC’s The Voice – tonight at 8PM EST!  While you wait for our recap, hit the comments and let us know what you have thought of Season 3 of The Voice, so far!

Tonight’s episode: Tonight we find out which artists will represent their coach in the top twelve, it’s the night we’ve been waiting for.  Two teams are joining forces, Team Adam and Team Blake to sing “Stronger” by Lady Gaga.

Time to find out Team Adam’s fate. Amanda Brown is the first artist saved and moving forward. The second name is Brian Keith. Adam now gets to pick one artist that he wants to go through, he chooses Melanie Martinez.  Both Jocelyn Rivera and Loren Allred are heading home.

Season 2’s winner of the Voice Jermaine Paul plugs his upcoming album, “Believe In This Life.”

It’s time to find out Team Blake’s fate, the first name to be saved is Terry McDermott. The second to be saved is none none other than Cassadee Pope. It’s going to be a tough decision for Blake, he has to choose the artist that he wants to save, it is Michaela Paige. What a shocker, Blake sends home country artist Liz Davis and not so surprising, Julio Cesar Castillo is also sent home.

Team Cee Lo and Team Christina perform “Drive By” together.

Team Christina is up next, we will find out who stays and who leaves. The first person who is safe is cutie Dez Duron. The second person safe is Sylvia Yacoub. Christina has to make her tough decision, she can only pick one to move on, she chooses to save Adriana Louise. Sadly, De’Borah and Devyn DeLoera are heading home.

It’s time to find out who on Team Cee Lo will be moving forward, the first person saved is Trevin Hunte and no surprise, Cee Lo said he thought he could win the whole show. The second name is Nicholas David. Cee Lo has to make his big decision, who is he going to save, Cody Belew. Diego Val and MacKenzie Bourg are heading home.