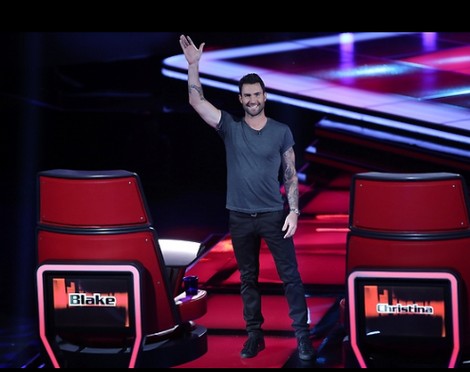 Tonight on NBC at 8PM The Voice returns with a whole new episode as the Blind Auditions continue with Part 7. On tonight’s show our judges Adam Levine, Cee Lo Green, Christina Aguilera and Blake Shelton  continue to battle each other for stars to fill the precious few slots on their teams.  If you missed last night’s show you can read our full and detailed recap here!

On last night’s show the Voice’s sixth audition show aired- My favorite of the evening was Dev Duron.  He was on The Voice last year and nobody turned around, but Christina was upset that she didn’t hit her button. Dez is ready to do it this time so that somebody turns around. Dez is singing Sara Smile. Blake is the first one to turn around, with Christina and Cee Lo right behind him. Cee Lo thinks he did a great job and remembers him from last season. Christina was too late last year, but she was on it this year. Cee Lo loved the soul in his voice, Dez tells him that he grew up with gospel. Christina loves soul music and gospel, so she thinks he should pick her. Blake tells Dez that he’s good looking and man to man, he’s hot. Dez chooses Christina.

On tonight’s show, with more than half the spots taken, the singers will have to put everything on the line as the judges get more and more picky filling their slots.

Tonight’s episode: It’s another awesome day of blind auditions and the anticipation of hearing more great voices fills the room.

Sylvia Yacoub is originally from Egypt, her musical influence is from her mother that wasn’t able to follow her dream in her country because she is a woman. Sylvia is singing Only Girl In The World. Christina, Cee Lo and Blake have all turned their chairs. Christina thinks it is a hard song and Sylvia has a lot in common with her. Blake thinks her name is country enough for him, he liked how she got better and better. Cee Lo thinks she is the only girl in the world and wants her to be on his team. Sylvia chooses Christina.

IJ Quinn is from a pig farm in North Carolina has a really high voice, but he’s not worried because he knows the judges are going to turn around their chairs. IJ is singing Virtual Insanity. Nobody turned around. Adam says he thought IJ was a girl, but all that aside, it sounded like he was straining. Christina loved his energy but thinks he needs lay back a little bit.

Charlie Rey has been working with his dad for seven years at his smog shop. Charley wants to get his name out there and show America that he can sing. Charlie is singing Home. Blake turns around, Adam is next. Charlie falls to his knees, so thankful that the judges turned around. Blake liked the version that Charlie did, it was a cool confident factor. Cee Lo was swept away by his performance. Adam thinks he did a wonderful job, a refined quality. Charlie chooses Blake.

Amanda Brown has spent a lot of time in church singing gospel music, she’s all about experiencing different genres. Amanda sings Why Don’t You Come Over. At the end, before it’s too late, Cee Lo turns his chair. Cee Lo thinks she did a great job, she reached the two best moments of the song. Christina thought she has the ad libs right on. Amanda is on team Cee Lo.

Yolanda Barber has been singing for about 45 years and she is the oldest artist this season, she thought she was too old but now, she knows she is supposed to be here. Yolanda is singing Get Here If You Can. Nobody turns around. Christina said that the reason she didn’t turn around is that she is looking for a specific sound. Cee Lo thinks she is a seasoned vocalist.

Cassadee Pope toured the world with her band, but is ready to go solo.  Cassadee is singing Torn. Adam, Christina and Blake turn around. Cee Lo is last, but he turns around as well. Adam and Christina give her a standing ovation. Christina thought it was well executed and thinks she can do it all. Adam says he would be so honoured to have her on his team. Cee Lo thinks she came across cool and comfortable, a wonderful job and great performance. Blake thinks she can be a superstar because there is nobody else like her. Cassadee chooses Blake.