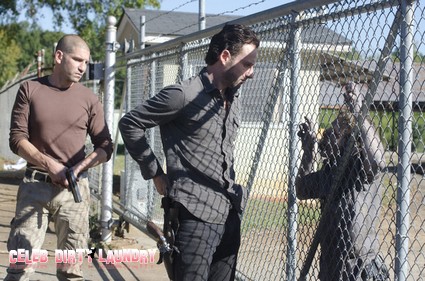 Did you watch last week’s The Walking Dead when Glenn, Hershel and Rick came back with Randall? If you didn’t see the episode, you can read all about that and Lori being a manipulative bitch by trying to turn Rick against Shane, HERE.

Tonight we have an all new episode of The Walking Dead called 18 Miles Out. Shane and Rick have been butting heads for quite some time now and that’s not going to change when the fight for Lori gets more intense. In tonight’s episode Shane and Rick appear to be “18 Miles Out” at a sort of mission, perhaps back at the high school where Shane gave up Otis so that he could make it back to the farm, which ended up saving Carl’s life. I think we might just be seeing a zombie Otis coming to attack Rick and Shane, will this be the end of Shane? Wouldn’t it be poetic justice? Somehow, I don’t think Lori really cares who comes back, as long as one of them does.

Poor Randall and his injured leg is still at the farm, and everyone is still divided on what to do with the guy who tried to kill Rick, Hershel and Glenn from a rooftop. Will Rick’s instinct about Randall prove right, or will he come out guns blazing to get revenge on the group for killing his friends?

Lori offers Maggie advice about Glenn, she tells her to basically get him to “man up”.

News came out this week that “The Governor” has been finally cast, it will be David Morrissey. I for one am looking forward to his character as in the comic books he will be a main antagonist against the group at the farm, so we are in for some real action as “The Governor” is charismatic, powerful and dangerous. No news on the date when he will appear, but I’m excited!

Official Synopsis: “18 Miles Out” The appearance of an outsider puts Rick and Shane at odds; Hershel’s youngest daughter faces a momentous decision and Andrew steps in to help.

Come back tonight for our full official recap, find out if Otis is coming back!